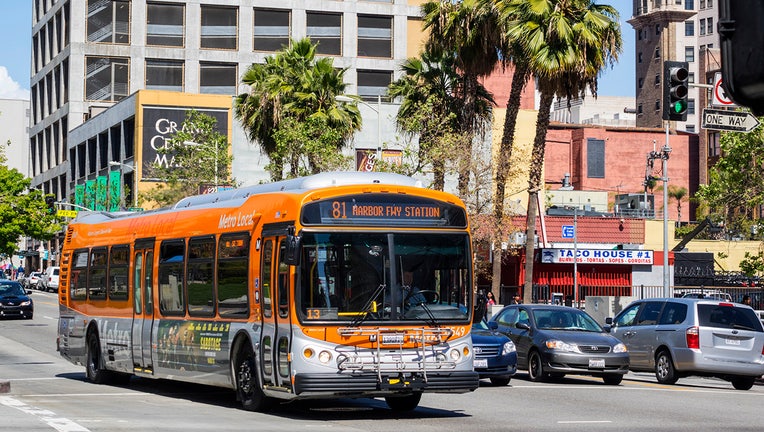 Initially, the study was planned to first focus on Los Angeles Unified School District, but board members said they want to fan out the program to include all Metro service areas.

Board member and Los Angeles City Councilman Paul Krekorian said LAUSD needs to be considered as a priority as it has a massive student enrollment.

"This is a monumental step forward, I think, to begin studying this, and it is a step in the right direction, but before we take too many steps, let's make sure we can make this happen because LAUSD is uniquely situated in the county," Krekorian said, adding that almost 700,000 students attend the district's schools. "LAUSD has a ... school-choice program. That means some students attend school 20 miles away from their home and there may or may not be district-provided transportation that's adequate to get those kids to those schools and, if there is, it may not be the most efficient way."

LAUSD reports that 80% of its students live below the poverty line and some struggle to pay for transit, especially homeless families.

"This is going to be a very difficult goal to achieve, and nobody should be under any misapprehension that somehow just opening the doors and letting everybody is an easy thing to do. It is not," Krekorian said. "But it is a vitally important thing for us to try to do for the students of LAUSD."

Board Chairman and Inglewood Mayor James Butts said he supported the study and that homeless children and families should be considered first, which is why he asked the board to approve including an equity measurement in the study. He also said it might not be possible to give every student free service due to the massive undertaking.

"It's schoolchildren and free stuff. Who can argue with that?" Butts said. "It's a great concept, but the bigger issue is, `Can it be done?' Because in the end, it's going to end up having to be equitable across this entire county, no matter who's first. Everybody pays into the funding of Metro."

LAUSD Superintendent Austin Beutner said just as school buses are free to ride, students should be able to ride Metro at no cost.

"Something as basic as coming up with the money to buy a bus pass to get to school can be a barrier, which prevents a child from getting the education they deserve," Beutner said.

The board directed Metro's CEO to work with LAUSD and other school districts, cities, the state and other stakeholders to return to the board in April with a report that includes:

--A review of the performance of existing free transit programs for K-12 students, including the Los Angeles DASH to Class program, Metro's Just Transit pilot with LAUSD and other school districts, and the city of Sacramento's RydeFreeRT program;

--Cost estimates of providing free Metro transit services for LAUSD and other school district's students and potential subsidies to phase the program based on Metro's Equity Platform;

--Forecasts of effects to Metro fare revenues as a result of the free service;

--A survey of various schools to determine transit dependency and interest of students switching to transit as a result of potential free fares;

--Analysis of effects on ridership, inclusive of effects to operations on transit lines that may experience overcrowding during peak hours and potential impacts to school bus ridership;

--Recommended actions to minimize or eliminate barriers for Los Angeles County households to take advantage of potential free transit for students, including partnering with LAUSD and other school districts for administrative support;

--And to return to the board in June with a separate report on a partnership with community college districts within Metro's service area to provide no-cost transit programs for campuses that have imposed student fees to cove the cost of transportation.