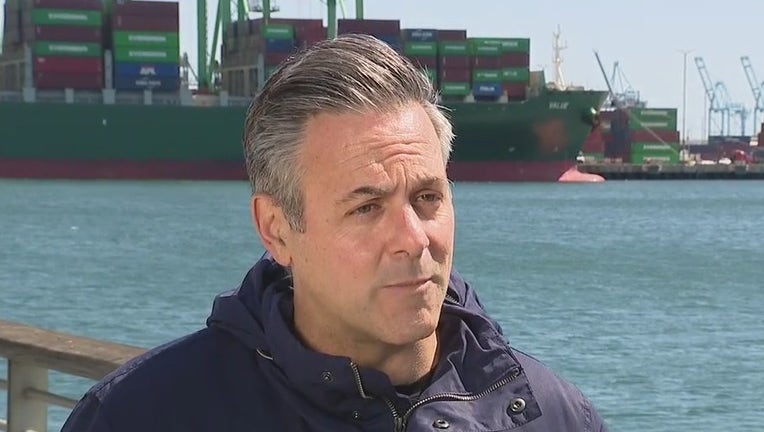 LOS ANGELES - Details were released Friday on a ballot measure organized by Councilman Joe Buscaino, who is running for mayor, to ban encampments across the city and prioritize emergency temporary shelter production and if approved, the measure would reduce salaries of elected officials if the goals are not met.

The language for the ballot measure was submitted to the Los Angeles City Clerk on Friday, according to the Safer Streets L.A. campaign. The City Clerk and the City Attorney will review it before organizers are given the green light to collect the required 65,000 signatures to place it on the November ballot.

The ballot measure calls for the mayor to submit a plan to achieve functional zero homelessness within three years, and if goals are not met, the salaries of the mayor, city attorney and Los Angeles City Council members would be reduced, according to the Safer Streets L.A. campaign.

Once adequate levels of temporary emergency shelter is produced by the city, the ballot measure, if approved, would ban camping in all public areas. In the interim, camping would be banned within a 1,000-foot radius of temporary shelter locations.

"We have an emergency situation playing out on our streets, and this ballot measure offers an all-of-the-above approach to addressing it," Buscaino said. "Built from my experience on the City Council, where my district has few- to-zero encampments as we have tirelessly pursued shelter for residents experiencing homelessness, this ballot measure connects people in need to services and ensures a roof over their heads. I have a vision for a safer, more humane L.A. -- and a plan that has overwhelming support for achieving it. We look forward to taking this ballot measure directly to the voters."

Buscaino is seeking a petition to get the measure on the November ballot after the council rejected his motion to get a ballot measure banning encampments and prioritizing temporary shelter.

Several council members voiced their opposition to the idea before voting on Nov. 19.

Councilman Mike Bonin said he believes the ballot measure would be solely focused on the problem of the presence of homeless encampments, and not on actually solving the homelessness crisis.

Mayoral candidate and chair of the council's Homelessness and Poverty Committee, Councilman Kevin de León, who was absent from that meeting, said in November that he thought a ballot measure would be the wrong approach.

"Since the City Council is actively moving forward policies to address homeless encampments through strategic outreach and housing for people in need, a ballot measure seems the wrong approach. The fact is that a ballot measure would be extremely costly to taxpayers and would likely result in a continuation of the litigation merry-go-round that's kept the city from implementing real solutions," he told City News Service in November.

While Buscaino's ballot measure would look to temporary emergency shelters to reduce homelessness, a coalition of labor unions and organizations are working on a ballot measure to create a tax on multi-million dollar property sales to fund solutions to homelessness, particularly permanent housing.