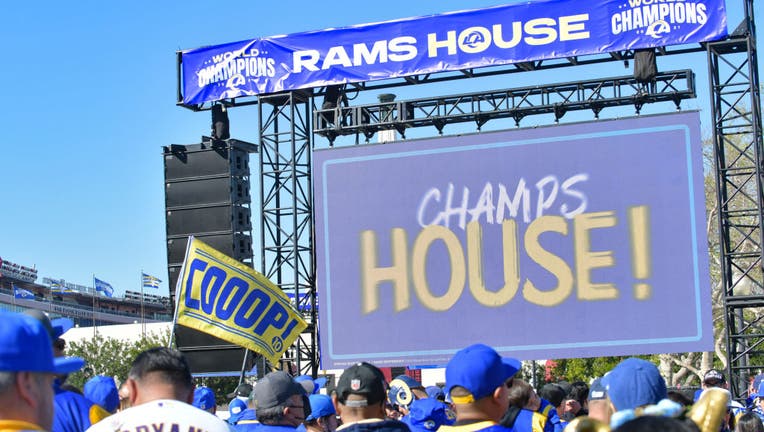 LOS ANGELES - A professional photographer who fell from the stage during the Rams' Super Bowl victory celebration -- drawing a seemingly indifferent reaction from quarterback Matthew Stafford -- remained hospitalized with a fractured spine Thursday, and friends were working to raise funds for her recovery.

But the Rams and Stafford announced they would be covering her medical bills.

Kelly Smiley was on the stage outside Los Angeles Memorial Coliseum on Wednesday and was attempting to snap a photo of Stafford when she suddenly fell to the ground at least eight feet below.

Video posted online shows Stafford reacting with surprise as the woman disappears from view directly in front of him, then quickly turning and walking away. Stafford's wife, Kelly, also reacted with surprise, but walked toward the edge of the stage and looked down, appearing to check on Smiley's condition.

The Los Angeles Rams are Super Bowl champions once again for the first time in 22 years after defeating the Cincinnati Bengals 23-20 in Super Bowl LVI at SoFi Stadium, and the city is celebrating.

Smiley was taken to a hospital, and she wrote on Twitter that "both my cameras broke but I'm ok." But three hours later, she tweeted, "Unfortunately I fractured my spine."

Smiley is a freelance photographer who does work for the NFL, NBA and NHL.

The Rams released a statement saying, "We have been in communication with Kelly Smiley since yesterday’s incident and we are sorry for what happened. As we told Kelly, we will be covering all her hospital bills and replacing her cameras. We wish her a speedy recovery."

Tim Kothlow, NFL photo editor, established a GoFundMe page on Smiley's behalf, and nearly $19,000 had been raised as of Thursday morning.

"The funds raised by this gofundme will help cover Kelly's growing medical expenses as well as replace the camera gear that was severely damaged due to her fall," Kothlow wrote on the page. "Since Kelly is a working photographer, she needs this gear to help keep her working after fully recovering.

"Kelly is loved by all who know her and is a well-respected individual in the photography community. Please consider donating to this gofundme to help Kelly hit the ground running after she heals up."

The page makes no mention of Stafford or his reaction to Smiley's fall.

With video of Smiley's tumble going viral on social media, many people bashed Stafford for his seeming indifference to her fall.

Lita Abella says she was just sitting in the stands watching the big game, when fell forward out of her seat, crashing into the rows in front of her. She suffered a fractured nose, eye damage and a separated shoudler.

"What kind of man just turns away after witnessing a woman fall?" one person wrote on Smiley's Twitter page. Responding to the GoFundMe page announcement, another person wrote, "Stafford just watched it happen and walked away." Multiple people suggested the Rams and Stafford should pony up funds on Smiley's behalf.

Some sought to defend Stafford, with one person writing, "Love all the hate he's getting like he's a doctor and could have helped in anyway besides notifying someone to call an ambulance, which he could have done after the camera is no longer on him."

Around midday Thursday, the Rams and the Staffords issued a joint statement saying: "We have been in communication with Kelly Smiley since yesterday's incident and we are sorry for what happened. As we told Kelly, we will be covering all her hospital bills and replacing her cameras. We wish her a speedy recovery."