The Los Angeles County Sheriff's Department announced it had completed its 19-month investigation into the allegations involving Manson.

In Smithline's initial suit, she accused Manson, whose full name is Brian Warner, of multiple instances of rape and abuse between 2010 and 2013.

"We thank and commend Ashley Smithline for dismissing her claims against Brian Warner without seeking or receiving anything in return," Manson's attorney, Howard King, said in a statement provided to Fox News Digital.

"Ms. Smithline has refused to be manipulated by others who are trying to pursue their own agendas against Mr. Warner. We wish her well and will continue to work to assure that a significant price will be paid by those who have tried to abuse our legal system."

The case was officially dismissed by Judge Fernando L. Aenlle-Rocha after Smithline filed a motion to withdraw representation under Jay Ellwanger in October and then failed to find new counsel by the court-ordered Dec. 5 filing date.

Smithline's suit was dismissed "without prejudice," which provides the opportunity for her to refile the claims in the future.

Manson's lawyer argued that the court filings showed "that before making their public accusations against Mr. Warner – all based on acts alleged to have occurred as much as ten or more years earlier – they met and spoke with each other, often as a group, regarding the accusations they would make."

Legal documents stated that "multiple women" have come forward to "falsely accuse" Manson of abuse, including Smithline and Esmé Bianco, who also retained Ellwanger for legal counsel in her own suit against Manson.

Evan Rachel Wood accused Manson of "grooming" her when she was a teenager in an Instagram post shared in February 2021. The former couple began dating in 2007 when Wood was 19 and Manson was 39. 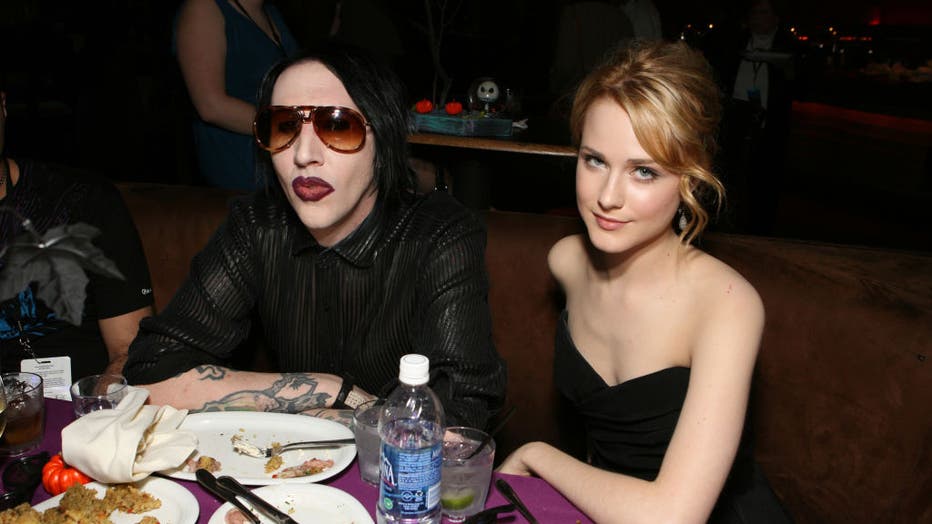 "The name of my abuser is Brian Warner, also known to the world as Marilyn Manson. He started grooming me when I was a teenager and horrifically abused me for years," she wrote at the time.

"I was brainwashed and manipulated into submission. I am done living in fear of retaliation, slander, or blackmail. I am here to expose this dangerous man and call out the many industries that have enabled him, before he ruins any more lives. I stand with the many victims who will no longer be silent."

Manson, 53, denied all accusations and filed a defamation lawsuit against Wood in March 2022, saying the claims against him were a "malicious falsehood."

In a declaration to the court from July 25, 2022, Manson addressed the accusations.

"I understand that on or around February 1, 2021, Wood posted to Instagram that I was her abuser, and shortly thereafter a number of other women simultaneously emerged with false public accusations against me of abuse, assault, rape, threats, trafficking, and the like," he said.

"These women include Ashley Morgan Smithline, Ashley Walters, Jane Doe, and Esme Bianco. To the extent I had relationships with these women, those relationships were consensual. I never abused, assaulted, raped, threatened, or trafficked any of these women, as they contend. Their accusations against me of abuse, assault, rape, threats, and the like are unequivocally false."

Fox News Digital has reached out to Smithline's rep for comment..