Paul McDonald recently honored his nearly quarter-of-century friendship with his pet turtle by asking her to be the flower girl at his wedding. (FOX Weather)

This is a love story filled with colors.

No, literally, it’s about a pet turtle named Colors and the quarter-of-a-century friendship she shares with her 32-year-old Chicago owner, Paul McDonald. That bond reached its pinnacle last month when he asked the Eastern painted turtle to be a flower girl at his wedding. 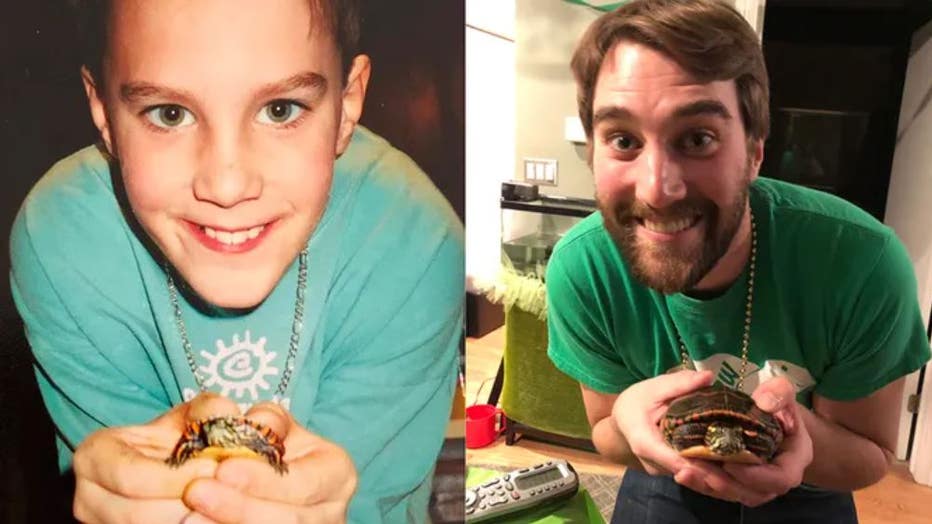 Paul McDonald was 8 years old at the time when he found Colors. The Eastern painted turtle is now almost 25 years old and shares a lifelong bond with his dad. (Paul McDonald)

Magic of the movies

Paul was only 8 years old when he first met Colors, who is now almost 25 years old. He was seeing ‘Paulie,’ ironically, a 1998 comedy about a wisecracking parrot caged in a research lab who told his life story to a lonely janitor in hopes to be free one day.

As he was leaving the movie with his best friend at the time, along with his friend’s mother as their chaperon, he spotted what appeared to him as a little pebble on the sidewalk.

"Then it started moving," Paul recalled. "We saw that it was a turtle, which I don't think either of us had ever really seen live before."

However, among all the excitement, the turtle was headed for danger as it inched closer to a busy parking lot.

The two boys, thrilled as they may be, weren’t really sure where the turtle came from, but they concluded that it must have recently hatched given how small it was. Paul remembers seeing some marshland behind the movie theater, yet after walking back there, the boys felt there wasn’t anywhere that seemed suitable to try and save her.

"We both wanted to take her home," Paul said. "But luckily my friend had just got a gerbil for his birthday, so his mom was like, ‘Absolutely not!’"

It was now up to Paul, who was given the opportunity to go home and convince his parents to let him keep the little turtle. So, he rinsed out his old soda cup from the movie with some puddle water left over from the rainy morning and gently scooped her up. Paul then rushed home and eagerly placed the turtle in a big bowl.

What unfolded next, after the blessing from his parents to keep his first pet -- an animal he would take ownership of and all the responsibilities that followed -- would change his world forever. 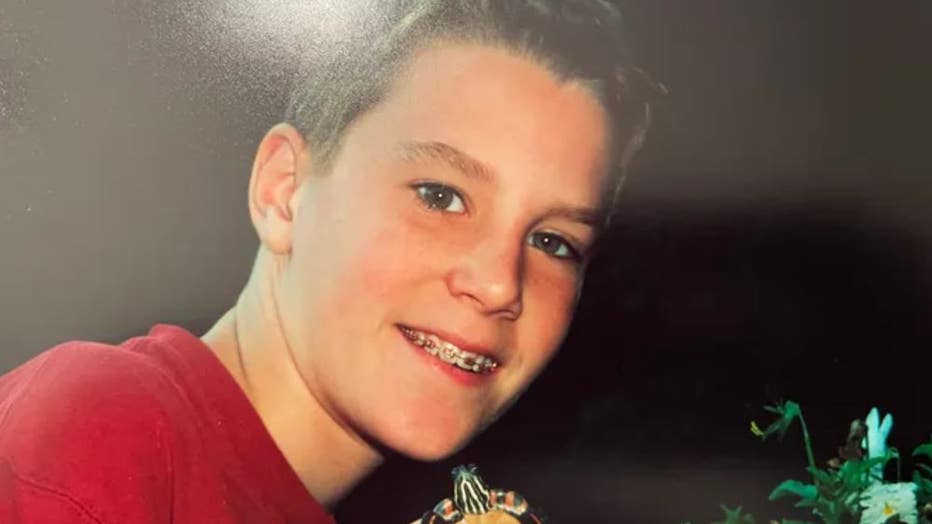 Paul said he was almost positive his parents also had no idea Colors would live as long as she has today. (Paul McDonald)

He named her Colors

At the time, Paul said he wasn’t very forward-thinking about how long a turtle would live. With a proper diet and adequate housing, some captive box turtles have been reported to survive up to 100 years in captivity.

Paul said he was almost positive his parents also had no idea Colors would live as long as she has today.

"I'm pretty sure that they thought, ‘All right, let's let him keep this turtle. It'd be good to teach him some responsibility and that it's going to last a year, tops, maybe less.’"

It would then teach him about how to say goodbye to a pet and offer a good life experience. 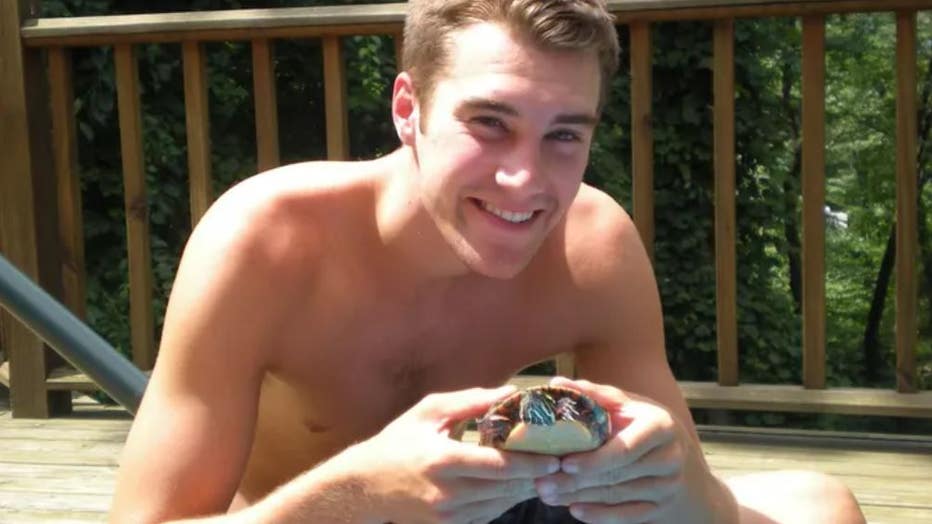 Colors has lived in various states with Paul as she followed him around at his various jobs from his hometown in Connecticut to throughout the Midwest. (Paul McDonald)

Almost a quarter-century later, that was proven to not be the case, and Paul said he is delighted with the outcome. The two spent every minute they had together, building a bond unlike no other.

Colors has lived in various states with Paul as she followed him around at his various jobs from his hometown in Connecticut to throughout the Midwest.

"We buckled her in her travel tank, had some bottled water and made sure she was going to stay hydrated for what would be a pretty long drive across country," Paul said. "Those were some fond memories."

The great remembrances of all would come annually on March 17, Colors’ "hatchday." It’s a day joined by friends and family to celebrate the life of the turtle. It was on Colors’ 21st hatchday that Paul realized he found another love in his life, Shannon – a woman he had been dating at the time.

"She immediately became completely enthralled with the idea," Paul said. "She wanted to make decorations. We had green streamers, balloons, green Solo cups for the partygoers. It was one of the early moments in our relationship where I was like, ‘Wow, this girl's pretty cool.’ We had just started dating, and she was going all out for my turtle’s birthday party." 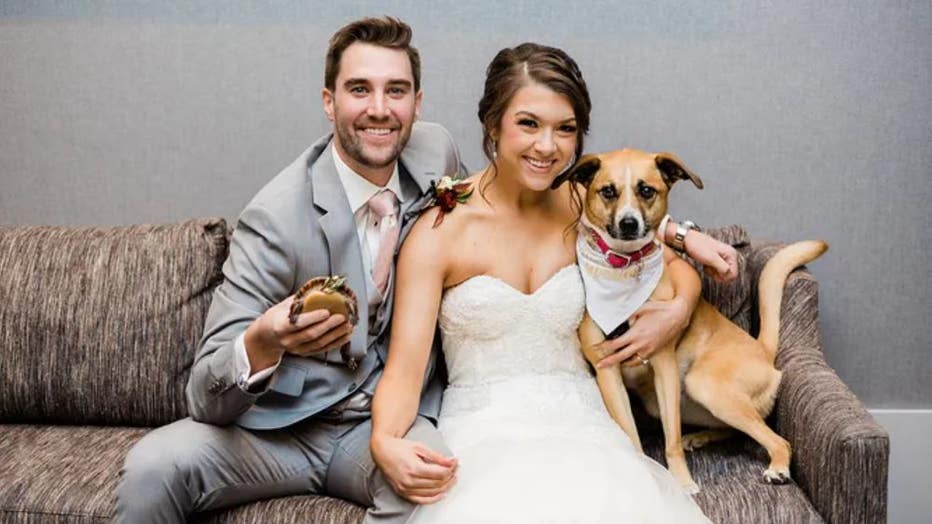 Paul and Shannon married on Nov. 12 at The Westin Chicago River North in front of 150 guests. Their pets, Colors and Kylie, played key roles in their wedding party. (Photography by Lauryn)

Paul and Shannon first met about five years ago while separately on vacation in Hilton Head, South Carolina.

A bachelor party brought Paul to the area as Shannon was invited on a girls' trip. The two set eyes on each other at a bar and began talking. They quickly found out they both lived in Chicago, and the two exchanged phone numbers by the night's end.

Once back in Chicago, they met again for their first official date. That was when Shannon first heard about Colors.

At the time, Shannon owned Kylie, a now 8-year-old rescue hound mix. It was the couple's love of animals they shared that helped spark their relationship.

"When we were planning our wedding, I wanted Kylie to be part of the ceremony," Shannon said. "Kylie was part of the proposal, actually, so I'm pretty attached to her." 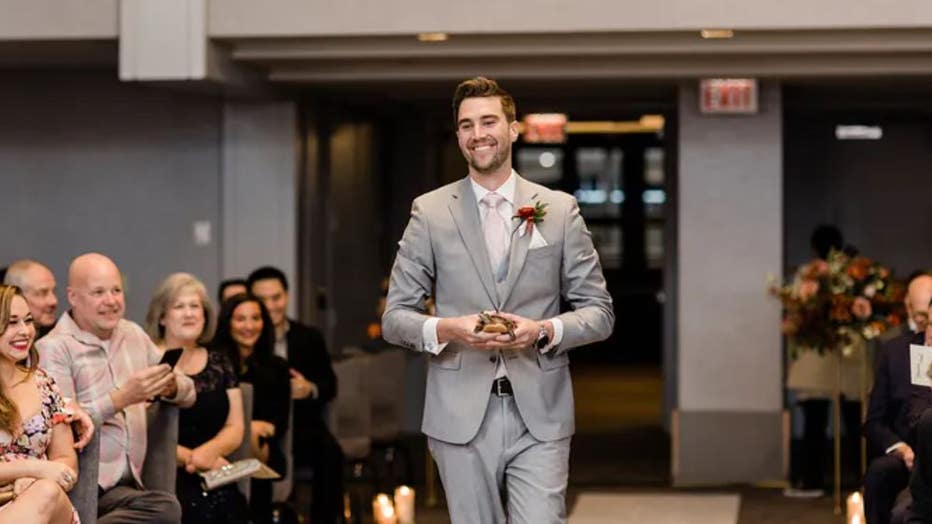 There were a lot of logistics to think about when trying to incorporate a turtle in a wedding. Colors did excellent as the flower girl as Paul helped walk her down the aisle. (Photography by Lauryn)

As the newly engaged couple began planning their big day, Paul wondered if it was possible to get Colors in the bridal party.

"I was excited about it," Shannon said. "I was like, ‘That would be great to have both of our babies be part of the ceremony.’ And we did a lot of thinking on how to get her involved."

Eventually, the couple realized the best and safest way was to have Paul’s "super social" turtle walk on her own four feet down the aisle. They knew once Colors was in a room full of people, she would enjoy herself as she mingled with the guests.

Paul and Shannon married on Nov. 12 at The Westin Chicago River North in front of 150 guests.

"It was a beautiful day," Shannon recalled. "It was a little cold outside, but I think that was kind of true Chicago weather. It was nice to give them a little flavor of where we live."

However, there were a lot of logistics to think about when trying to incorporate a turtle and a dog into the ceremony, the couple said. They connected with Julianne DeChaump, owner of Luxe Dog Nanny, who offers dog wedding services built around her client’s wedding vision and their best furry – and now shelled – friends.

As the 11 bridesmaids and 11 groomsmen made their way down the aisle, the highlight of the ceremony (not to mention the bride) was getting ready for her big reveal in a water holding tank feet away from the packed ballroom.

DeChaump kept a safe and watchful eye on Colors before removing her from her tank and entering the room in what was once considered a supporting role turned into a main role. 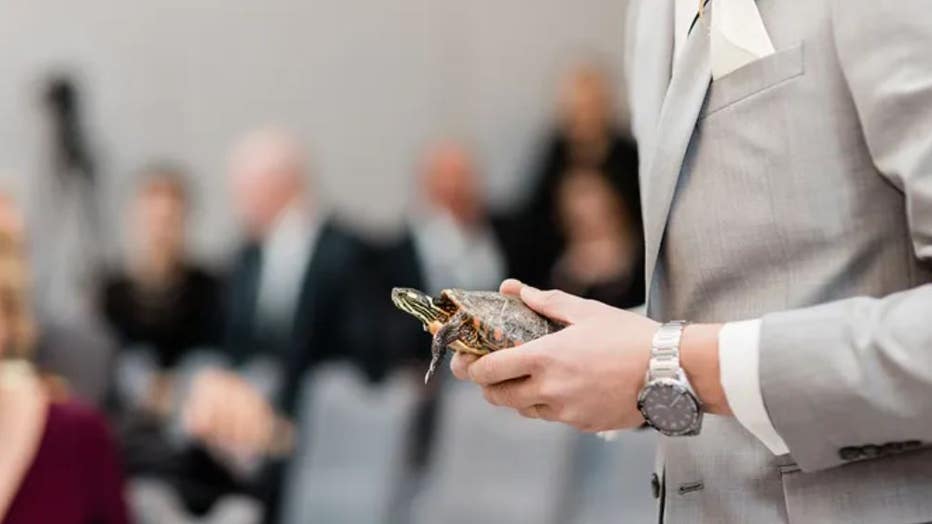 Colors was the star of the wedding. She didn't go in her shell and was very sociable. (Photography by Lauryn)

"She was excited," DeChaump said. "She didn't go in her shell. And that's a really big deal for a turtle. She stayed out, and she kept moving."

Kylie followed a short time later with the same applause.

"They were both stars of the wedding," Shannon laughed.

When Shannon wrote her vow to Paul, she admitted she saw this coming years ago. It wasn’t because she made a choice to love him forever, but because falling for him was as natural and involuntary as breathing, and marrying him was inevitable.

"I discover more reasons to love you every day," she said in her promise. "I love your dedication and passion for making our ideas and our dreams a reality. I love your smile and have developed an appreciation for all the things that make you smile - turtles, Legos, dinosaurs, video games, spooky season, Nic Cage movies, the lake, the ocean, pretty much any body of water. I love hearing you say ‘HELLUR’ when you see a turtle."

Yes, Colors has been a support system for Paul, just as Kylie is for Shannon through all sorts of life changes. After a stressful day and coming home, seeing their pets excited and happy to see them brings a lot of joy. 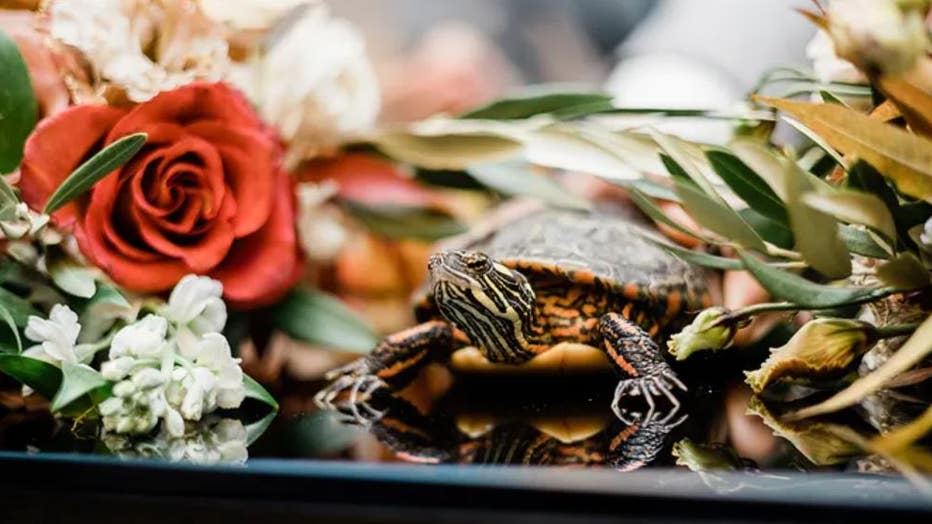 Colors has been a support system for Paul, just as Kylie is for Shannon through all sorts of life changes. (Photography by Lauryn)

"It's emotional support," Shannon said. "It's joy more than anything, and having something that just loves you unconditionally."

As for Paul, every time he sees Colors, his face lights up and smiles, just like he does when he sees his wife in a room.

"It's just a wonderful companionship that has lasted so long that has gotten better every year," Paul said.

It’s a love story like no other. It’s a camaraderie between a boy, his turtle, a girl and her dog who all promise to grow old together until their last breath, and probably longer.