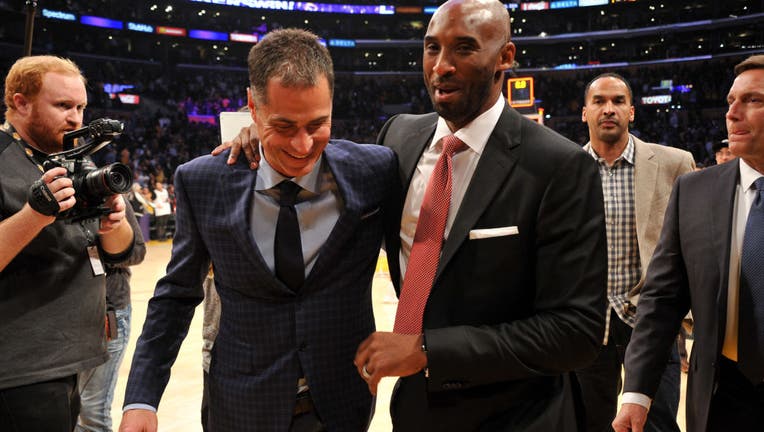 "With that, there has been an amputation of part of my soul," he wrote.

"Kobe was a force of nature, deep and obsessed with excellence,"according to Pelinka.

"He was wise, determined, passionate. A visionary beyond measure. A dedicated and loving husband, and a 'girl-dad' like no other.  When he walked into a room, the energy ignited.

He was high voltage, with a motor that had no limits. His mind had an infinite capacity to learn. He was, simply put, the most inspirational athlete of our time. What the world may not know, is that he was also the best friend anyone could ever imagine.

"Gigi was pure joy. Her smile brought comfort to any and every occasion. She was brilliant, kind and warm. And, like her dad, when she stepped onto the basketball court, she took on an entirely different nature, and boy could she play. Her basketball destiny was apparent, and the world knew it.

She was also an extraordinary, loyal and supportive sister, and a wonderful friend to my children. My son and daughter always left time with Gigi feeling better about life itself. Everything Gigi stood for, I am so proud of.

"Maya Angelou once wrote 'when great trees fall, lions hunker down intall grasses.' What I am daily learning is that after the tragic loss of these nine souls, life on this side of eternity will never be the same. For any of us who knew them, there is an irreplaceable void left behind.

"But I am also finding that there is a hope. For now, each new step for me will be full of deep love and prayers, as a heavy sorrow for Vanessa, Natalia, Bianka and Capri, and all the families involved, is slowly redeemed into something healed and new. I am coming to realize that nothing can separateany of us from the love and inspiration we've received from Kobe and Gianna, nothing at all.

"Their lives have shown me that death has no victory. Last Sunday is not the end of the story. It's just a new beginning. Kobe and Gigi's legacies will live on -- and gain even more power and influence.

All of us touched by them will now try to become torch carriers of their legacies. And, while we do that, we can be certain of this: Kobe and Gigi will continue on, forever, playing a joy-filled game of basketball in heaven above."