Communities such as Lancaster, Palmdale, Studio City and Santa Clarita were among the 10 Los Angeles County areas that had the highest rates of new COVID-19 infections during a two-week period that ended Nov. 6, even though most of the areas that made the list have above-average vaccination rates, the county's health director said Friday.

LOS ANGELES - Communities such as Lancaster, Palmdale, Studio City and Santa Clarita were among the 10 Los Angeles County areas that had the highest rates of new COVID-19 infections during a two-week period that ended Nov. 6, even though most of the areas that made the list have above-average vaccination rates, the county's health director said Friday.

Of the 10 communities that had the highest rate of new cases, seven had vaccination rates that exceed the countywide rate, according to numbers presented by the Department of Public Health. Health Director Barbara Ferrer said officials are studying the data to determine what is driving higher case rates in the communities, but she insisted the numbers don't mean vaccines aren't effective. 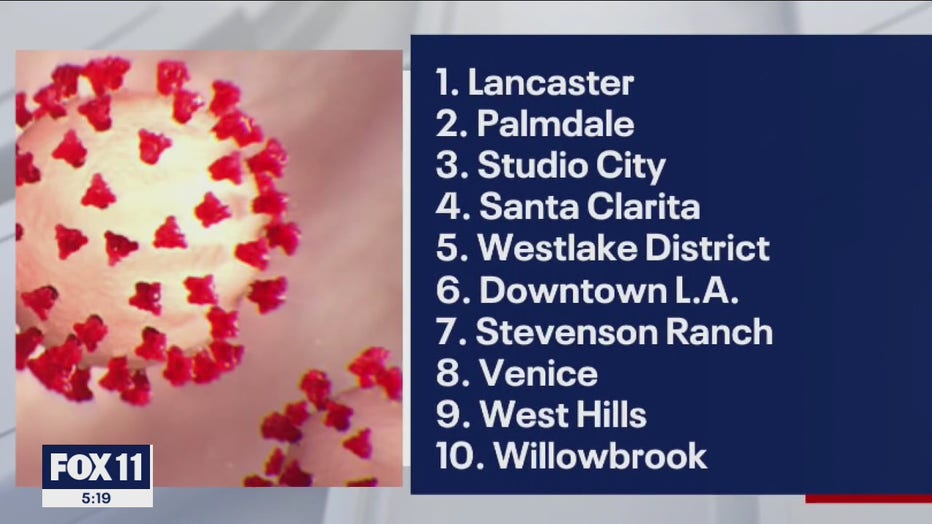 "If you're not vaccinated, you've got a much higher risk of ending up infected, ending up in the hospital and tragically passing away. That's crystal clear and it hasn't really changed for months now," Ferrer said during a media briefing.

Ferrer said authorities are trying to examine what factors are in play in individual communities that have above-average vaccination rates but still had among the highest new-case rates.

Of the 10 communities that had the highest rate of new cases, seven had vaccination rates that exceed the countywide rate

The countywide number of fully vaccinated residents is 73%.

Of the other communities on the top 10 list of highest new-case rates, only Willowbrook, at 62%, falls below the countywide vaccination rate.

She said a variety of factors could be at play in different communities, among them the possibility that some areas had large numbers of people who were never previously infected with COVID-19 and remain unvaccinated, leading to higher current infection numbers.

"That certainly is possible, although we have to look at more data to draw that conclusion," Ferrer said.

But she noted that the median age of people becoming infected ranges from 26 to 36, meaning young people are driving the numbers.

"I will say the one thing that does jump out -- the average ages were very low in all these communities," she said. "This is, essentially, in the communities with the highest rates, this is a pandemic that is in fact fueled by younger people."

Given the young median age of infected people, "we know that intermingling both socially and at work sites is contributing," she said.

"Whoever you are and wherever you live, whether you live in a community with a high vaccination rate or with not-so-high vaccination rates, the most important thing you as a person are going to need to do is get yourself vaccinated, the people you love vaccinated, and then be sensible about precautions around intermingling while transmission rates remain relatively high across the county," Ferrer said.

The county reported another 26 COVID-19 deaths on Thursday, raising the overall virus-related death toll to 26,949. Another 1,088 cases were reported, giving the county a cumulative pandemic total of 1,515,324.

The rolling average daily rate of people testing positive for the virus in the county was 1.1% as of Thursday.

According to state figures, there were 611 COVID-positive patients being treated in county hospitals as of Thursday, down from 616 on Wednesday. Of those hospitalized, 148 were in intensive care, down from 155.

She said the number of people who received a first dose of vaccine in the past week jumped up sharply, due primarily to the expansion of vaccine availability to include children aged 5-11.

Black residents continue to have the lowest vaccination rates, at 54%, followed by Latina/o residents at 59%, whites at 72% and Asians at 80%.

Ferrer noted that the county has not seen a spike in COVID infections following Halloween, unlike the situation last year when cases began rising sharply. She said she is hopeful that residents will continue to exercise caution over the upcoming Thanksgiving holiday.

"We will need to take a cautionary note from what we're currently seeing in other parts of the United States and in other parts of the world right now," Ferrer said. "In the Mountain West and throughout Europe, cases are rising and hospitals are once more flooded with COVID cases, almost all of them among unvaccinated people. These trends remind us that the virus is much more easily transmitted when people are indoors and intermingling without protection from vaccines and other mitigation measures."