TAMPA, Fla. - At least three people from Florida are facing charges following the U.S. Capitol riot, including a man from Parrish who was booked into Pinellas County jail over the weekend.

Johnson's attorneys asked that he be released on bond, while federal prosecutors objected and called him a threat to the community who needs to be held accountable for his actions.

The smiling 'lectern guy' seen in a now-viral photo taken during this week’s invasion of the U.S. Capitol was arrested in Pinellas County.

The judge agreed to give Johnson a $25,000 bond, with several conditions that include surrendering all of his weapons and his passport. He will also have a curfew and an ankle monitor. Johnson will be allowed to travel anywhere in Florida and parts of Washington, D.C. However, he can only travel to D.C. for court matters and meeting with his attorneys.

Johnson was dubbed the 'lectern guy' on social media after a Getty photograph showed him in the Capitol, hauling the lectern.

Monday, his attorney said there had been "a lot of judgement based on that photograph which has led to death threats to Adam and his family."

"What he’d like to do is just get home to his family," David Bigny continued. "He’d like some privacy and to spend some quality time with them."

Prosecutors said the photo helped investigators identify him, leading up to his arrest Friday night.

Adam Johnson was caught on camera holding House Speak Nancy Pelosi’s lectern during the riot at the US Capitol. He was booked into the Pinellas County Jail over the weekend.

At first, he was mistakenly identified by some social media users as "Via Getty," based on a misinterpretation of the photo caption -- but a former parishioner from his church told FOX 13 that she immediately knew who it was.

"I instantly recognized him, so it's kind of like, 'What are the odds?'" Alex Noon said Thursday. "I just wanted to make sure people knew who he was so that he could be held accountable."

His attorneys conceded that the viral photographic evidence presents a challenge in the case.

"I don’t know how else to explain that," David Bigny offered. "That would be a problem. I’m not a magician and neither is [attorney] Mr. Bigny. Yeah we’ve got a photograph of our client with what appears to be inside a public building, inside the Capitol, on government property."

RELATED: How to talk to kids about the chaos at U.S. Capitol

Johnson was booked into Pinellas County Jail and, as of Monday, was facing three federal charges: one count of knowingly entering or remaining in any restricted building or grounds without lawful authority; one count of theft of government property; and one count of violent entry and disorderly conduct on Capitol grounds. 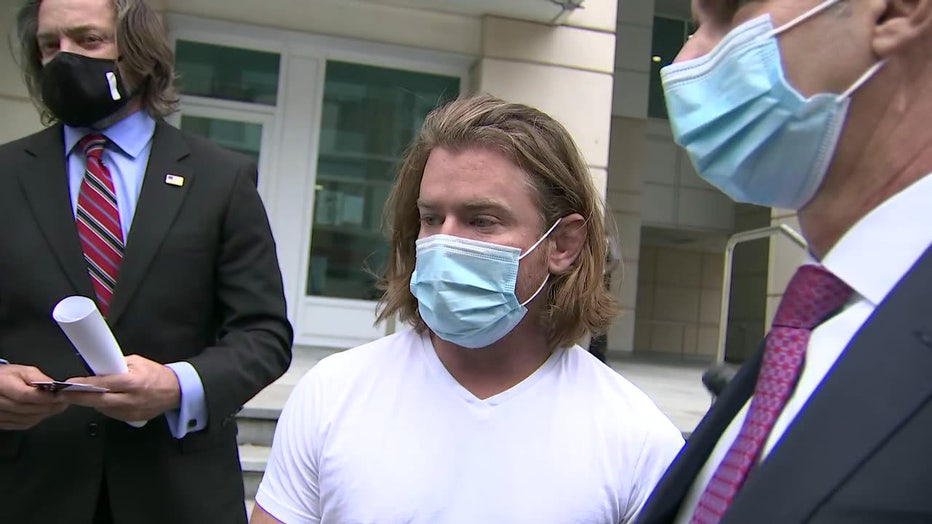 Adam Johnson and his attorneys outside federal court in Tampa.

Court documents show the lectern is worth more than $1,000.

The riot at the U.S. Capitol remains under investigation, and experts say Johnson could face additional charges.