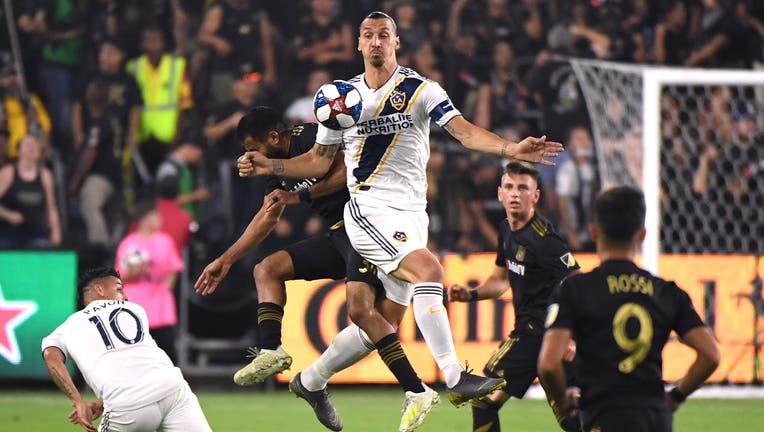 LOS ANGELES, CALIFORNIA - OCTOBER 24: Zlatan Ibrahimovic #9 of Los Angeles Galaxy plays a ball off his chest in front of Steven Beitashour #3 of Los Angeles FC during the first half of the Western Conference Semifinals at Banc of California Stadium o (Getty Images)

LOS ANGELES - The Los Angeles Football Club and Los Angeles Galaxy will both begin play in the MLS is Back Tournament on July 13, Major League Soccer announced Wednesday.

The tournament will begin July 8 with a game between MLS' two Florida teams, Orlando City SC and Inter Miami CF.

The group stage will take place over 16 consecutive days with each group game counting toward the 2020 regular season standings. All teams will have at least four full days between games.

The top three teams in the six-team Group A will advance to the knockout stage along with the top two teams from the remaining five groups and the next three highest ranked teams. The group of 16 will consist of four consecutive days of doubleheaders, July 25-28.

The tournament winner will earn a spot in the 2021 Concacaf Champions League. Players will have the opportunity to earn additional bonuses as part of a $1.1 million prize pool.

The tournament will be held at the ESPN Wide World of Sports Complex at Walt Disney World Resort in Florida without fans in attendance. Teams began arriving Wednesday at the Walt Disney World Swan and Dolphin Resort, 3.5 miles from the ESPN complex in the Orlando area.

All 54 games will be televised by the ESPN, Fox Sports and Univision families of networks.