LOS ANGELES - The union representing Los Angeles police officers lashed out at Mayor Eric Garcetti, objecting to his use of the word "killers'' while discussing proposed law enforcement funding cuts with a group of black community leaders, but Garcetti said his words were being "twisted.''

"Eric, do you really believe that Los Angeles police officers are killers?'' said Detective Jamie McBride, a member of the Los Angeles Police Protective League Board of Directors.

On Thursday, Garcetti spoke to a group of black community leaders about the anti-police-brutality protests that have rocked the city over the past week, and about his proposal to slash as much as $150 million in funding from the Los Angeles Police Department's $1.8 billion budget in favor of financing social-service programs in black neighborhoods. 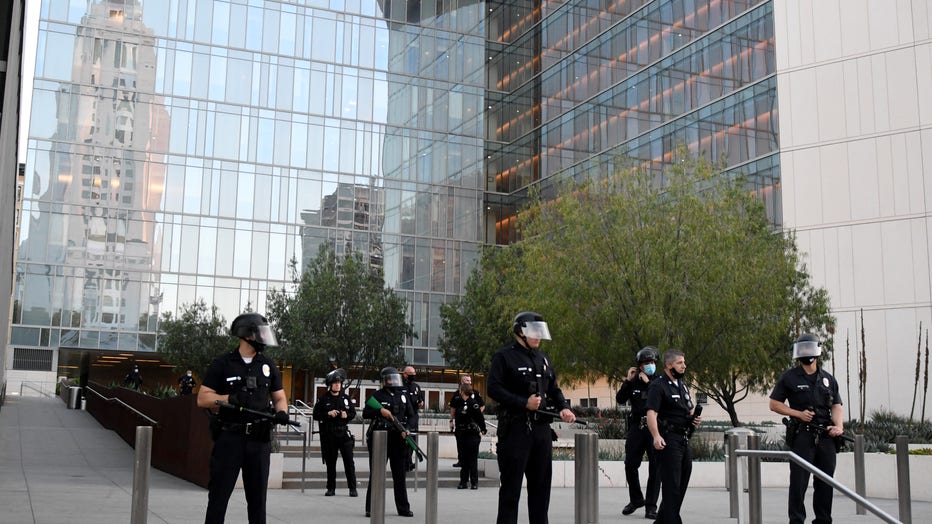 LOS ANGELES, CA - MAY 28: LAPD stands guard outside the Police Headquarters as demonstrators protest of the death of George Floyd, a black man who was in police custody in Minneapolis in Los Angeles on Thursday, May 28, 2020. (Photo by Keith Birmingh

When asked by reporters about his comment, Garcetti said he stood by his comments and that reports of his statements were taken out of context.

"It is so important what we say, but it's also so important to listen to what we say,'' Garcetti said. "But when I talked about killers, I said, our collective burden here in this society is that we let black men and women die in this city.''

As Garcetti was discussing the proposed police funding cut, he said, "We must lead. I got calls from mayors around the country, some of them saying, `I'm so excited,' the other ones saying, `What the hell did you do? Now  I (have to) shift money.' That's exactly the point. It starts someplace, and we say we are going to be who we want to be or we're going to continue being the killers that we are.''

McBride, a 30-year veteran of the police department, said union members have lost "all confidence'' in the mayor, although the union has not undertaken a formal no-confidence vote.

The union on Friday morning issued a blistering statement in response to the "killers'' comment, saying, "Eric has apparently lost his damn mind,'' and suggesting that if the city had a charter provision allowing the removal of
a mayor for illness or incapacity, "we'd plead for it to be invoked.''

At a midday news conference, McBride said the union has serious reservations about Garcetti's ability to lead.

"As far as the mayor's mental health, I think that the mayor, no joking around, I think ... with the pandemic, now with the current situation in Los Angeles, we are honestly concerned about the mental health,'' McBride said.

McBride said he supports funding community programs, but not at the
expense of the LAPD.

"There are other budgets, but because people are verbally attacking and physically attacking the Los Angeles Police Department to make those
(political) groups happy, they're saying they're cutting from our budget,''
McBride said.

"What you need to do is ask the citizens of Los Angeles, `Do they feel comfortable with cutting $150 million from the police budget?' I would
say, `No.' Can you imagine if that money was cut and the same situation
happened in a year or two? I think it would be 10 times worse.''

Garcetti announced the proposed funding cut Wednesday, saying $250
million in his proposed budget would be shifted, including $150 million from
the LAPD. Garcetti had earlier committed to not trimming any public safety
budgets.

Garcetti said these cuts were not an "attack'' on the LAPD.

Garcetti and Police Commission President Eileen Decker also announced
a series of other measures, including a review of training procedures and
beginning the use of an independent prosecutor to review officer-misconduct
cases.