The Los Angeles Police Department is holding a fundraiser Wednesday for the family of Fernando Arroyos, who was killed while off duty earlier this month.

LOS ANGELES - The Los Angeles Police Department is holding a fundraiser today for the family of fallen officer Fernando Arroyos.

Arroyos, 27, was killed off duty earlier this month in South Los Angeles. He and his girlfriend were looking at a house they were considering buying when Arroyos was shot during an apparent attempted robbery. He was a three-year veteran of the department and was assigned to the Olympic Division.

Four people, including three alleged members of the Florencia 13 gang, are facing federal charges in the case, and if convicted face a minimum sentence of life without the possibility of parole.

"He was a really humble hard worker, always walked around with a smile, and he was just really really nice to be around," said one of Arroyos' fellow officers. "We're going to miss him a lot. He's family to us."

The Olympic Division station where Arroyos was assigned is hosting a cookout fundraiser Wednesday beginning at 10 a.m. at the station on Vermont Avenue. The event is open to anyone. A $10 donation will buy a plate with two tacos, rice, beans and a drink. Officers are also selling pulled pork sandwiches, and raffles are being held. All the money will go to Arroyos' family.

Donations can also be made at badgeofheart.org

The fundraiser will continue from 10 a.m. to 8 p.m. Wednesday. The Olympic Division is at 1100 S. Vermont Ave. 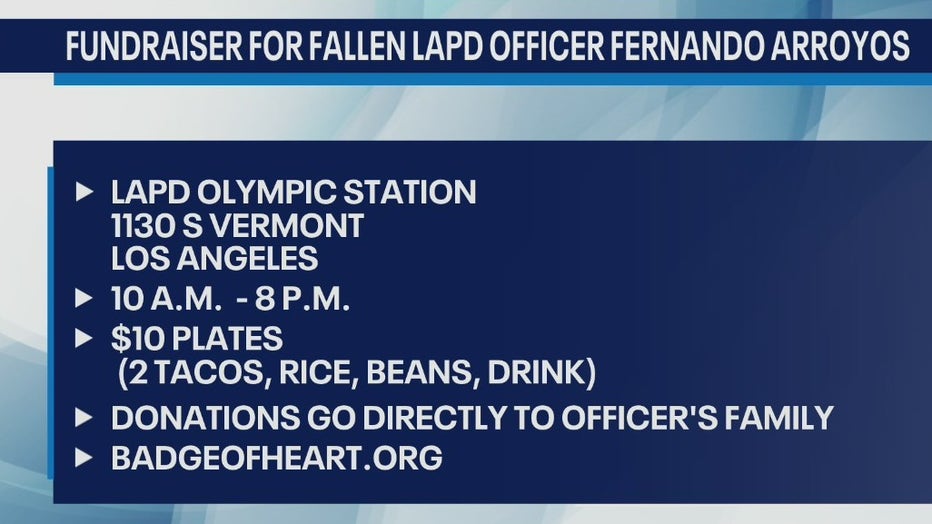