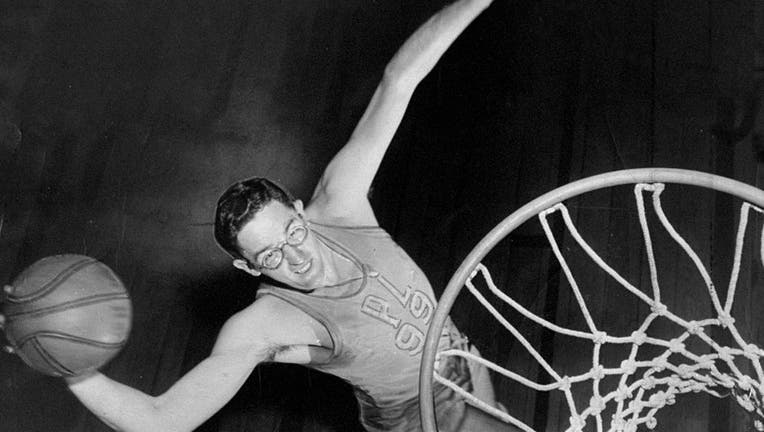 LOS ANGELES - The Los Angeles Lakers will retire the No. 99 jersey worn by George Mikan when he led the then-Minneapolis Lakers to six championships from 1949-54 before Sunday evening's game against the Denver Nuggets at Crypto.com Arena.

Mikan will be the 11th Laker to have his jersey retired and the first to have not played in Los Angeles. The team will retire the No. 16 jersey worn by Pau Gasol on March 7, when it plays host to the Memphis Grizzlies, the team Gasol began his NBA career with.

The 6-foot-10-inch Mikan was professional basketball's first dominant center. In his eight seasons with the Lakers, Mikan was a four-time scoring leader and led the NBA in rebounds in the 1952-53 season, the third season the statistic was kept. Before the 1969-70 season, league leaders in points, rebounds and assists were determined by totals rather than averages.

Mikan was the first player in NBA history to score 10,000 points.

The NBA did not have an MVP award until the 1955-56 season, Mikan's final season.

SUGGESTED: Lakers now 0-5 to start season after loss to Timberwolves

Mikan joined the Lakers in 1947, when they played in the National Basketball League, in a dispersal system after his first professional team, the Chicago American Gears, folded. He was the league's MVP and leading scorer in the 1947-48 season, leading the Lakers to the championship.

The Lakers moved to the Basketball Association of America — the precursor of the NBA — the following season and again won the championship, with Mikan again the league's leading scorer. Its three seasons have retroactively been considered NBA seasons and records recognized by the league.

Mikan's numerous honors include being a member of the NBA's 25th, 35th, 50th and 75th anniversary teams and being selected by The Associated Press as the greatest basketball player in the first half of the 20th century, mainly for his play at DePaul, where he was a three-time consensus All-American and led the Blue Demons to the 1945 National Invitation Tournament championship, then more prestigious than the NCAA tournament.

Following his retirement, Mikan coached the Lakers for a portion of the 1957-58 season and was the first commissioner of the American Basketball Association, serving from 1967-69.