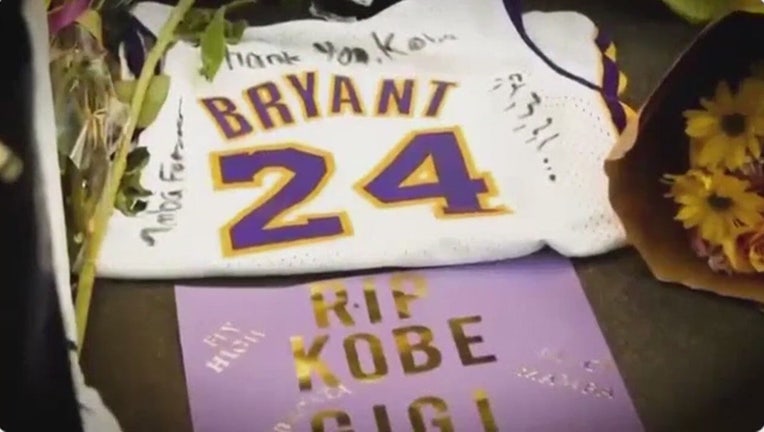 LOS ANGELES - The Los Angeles Lakers are set to play their first game at Staples Center, also known as “The house that Kobe Bryant built,” since the death of the retired NBA superstar and global icon.

The Lakers will face the Portland Trailblazers at 7:30 p.m. Friday night. The emotionally charged game will be nationally televised on ESPN.

Bryant, along with his 13-year-old daughter Gianna, two of her teammates, along with five others perished in a helicopter crash on what was a foggy day in Southern California Sunday.

According to his longtime friend, Carmelo Anthony, who is having an incredible comeback season with the Portland Trail Blazers, Bryant planned to attend Friday’s game.

“You just called and told me you were coming to the game Friday and that you were proud of me and ‘regardless of anything, stay true to myself, ‘” Anthony said in an Instagram post.

Anthony is not expected to play in Friday's game, due to his "continued grieving and emotions," NBA Insider Shams Charania reported.

Bryant's sudden death has been difficult for the entire NBA, the City of Los Angeles, and beyond.

For those in the Lakers family, Bryant's passing has been particularly hard. Bryant spent his entire 20-year NBA career wearing purple and gold, bringing five championship titles to the city.

• The Issue Is: NBA legend Tracy Murray reflects on the life and legacy of Kobe Bryant

Several retired and former Lakers have shared their condolences on social media.

Bryant’s last social media posts were dedicated to congratulating LeBron James who passed him on the all-time scoring list Saturday.

Bryant and Shaquille O’Neal, often ranked as one of the best duos in NBA history, won three NBA championships together. Bryant was close to Shaquille's son, Shareef, who recently announced he’s leaving UCLA.

Shareef shared direct messages between the two that indicate Bryant had reached out to him within hours of his fatal flight.

After much deliberation, Shaquille will continue to host a Super Bowl event in Miami this weekend. Proceeds from the event will go to the victims’ families and the Kobe and Vanessa Bryant Foundation, he said.

Grieving fans have been paying their respects with a growing memorial outside Staples Center.

"I’m coming from San Diego…I had to come over here and pay my respects because of how great Kobe was not just as a player, but as a father and how he was helping and doing so much for not only the community, but for the world," Ray Valdez told FOX 11’s Mario Ramirez.

"As someone my age, it’s hard to look up to someone younger, but Kobe was a great person and a great father and I have daughters too," Valdez said.

The franchise is expected to pay homage to Bryant before, during and after the game.

The Clippers lost 103-124 to the Sacramento Kings.

The Kings are coached by former Lakers player and coach, Luke Walton, who won back-to-back NBA championships with Bryant in 2009 and 2010.

"Kobe was a friend, a teammate, but most importantly, a father. I know that’s what was most important for him. The love he had for his family and his daughters is heartbreaking…it’s tough to deal with," Walton said.

The Lakers are currently ranked first in the Western Conference with a 36-10 record.