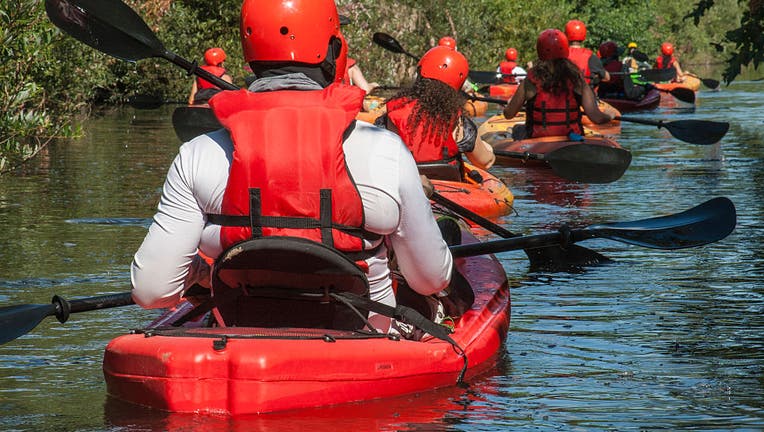 A kayak tour is led by LA River Expeditions in one of the portions of the Los Angeles River opened as a Recreational Zone during the Summer months. Sepulveda Basin Recreation Area, Los Angeles, California. (Photo by: Citizens of the Planet/Education

LOS ANGELES - The Los Angeles River Elysian Valley and Sepulveda Basin recreation zones open Monday for kayaking and other activities for the 2022 summer season, which runs through Sept. 30.

The zones are managed by the Mountains Recreation & Conservation Authority, which provides guided tours and kayak rentals to a limited number of private groups.

"We are looking forward to operating the ninth season of the LA River Recreation Zone," said Mountains Recreation & Conservation Authority Chief Ranger Fernando Gomez. "We want to remind everyone to take safety precautions when going out on the river. You must wear a personal flotation device and a helmet. Also, use sunscreen and drink plenty of water. You will be in the sun."

Swimming is not allowed in the river, and people are encouraged to check the river's water quality and conditions ahead of planning their trip by going to lacitysan.org/waterquality.

"As the L.A. River continues to be a treasured natural resource and recreational asset to the city, we will do our part to keep the river clean and healthy for all Angelenos in years to come," said L.A. Sanitation and Environment Director and General Manager Barbara Romero.

Councilman Mitch O'Farrell, who represents the Elysian Valley, said he'll be "among the thousands of Angelenos who will venture onto the river this season to enjoy this majestic public space, including the new Taylor Yard Pedestrian and Bicycle Bridge, which opened earlier this year."

"The opening of the Sepulveda Basin and L.A. River recreational spaces always marks the start of the summer -- giving Angelenos and Valley families a safe place to relax and have fun outdoors."

People can learn more about the Los Angeles River Recreation Zone at lariverrecreation.org.