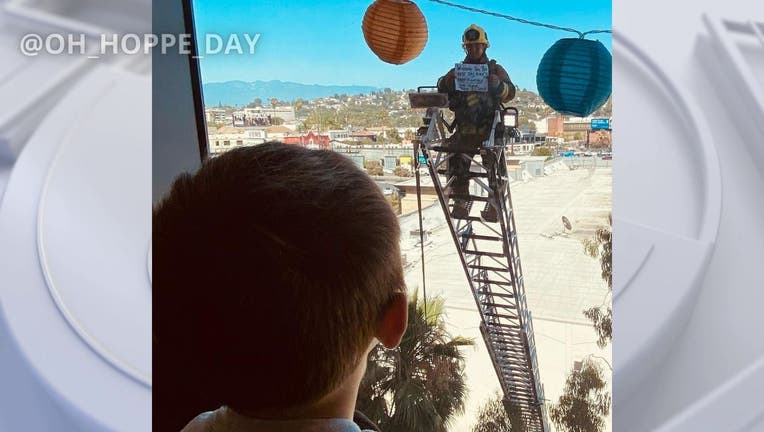 A Los Angeles firefighter encourages a little boy ahead of a serious medical procedure. PHOTO: @Oh_Hoppe_Day

LOS ANGELES - A Los Angeles firefighter is getting kudos on social media after he was seen cheering up a young boy at the hospital.

According to the social media post shared by Bree Hoppe, she and Jaxx were both nervous ahead of the little boy's blood transfusion procedure. Few minutes into the serious medical procedure, the Los Angeles firefighter climbed up the ladder and cheered on the little boy from afar.

The firefighter, who is with Truck 35 of the Los Angeles Fire Department, was spotted holding up a sign that read, in part, "Wishing you the best day ever. Keep fighting."

Hoppe added in the social media post that Jaxx's new "chill spot" is now by the hospital window following the cheerful surprise from LAFD.

LAFD reshared Hoppe's post on social media, calling children like Jaxx "braver than we could ever hope to be."