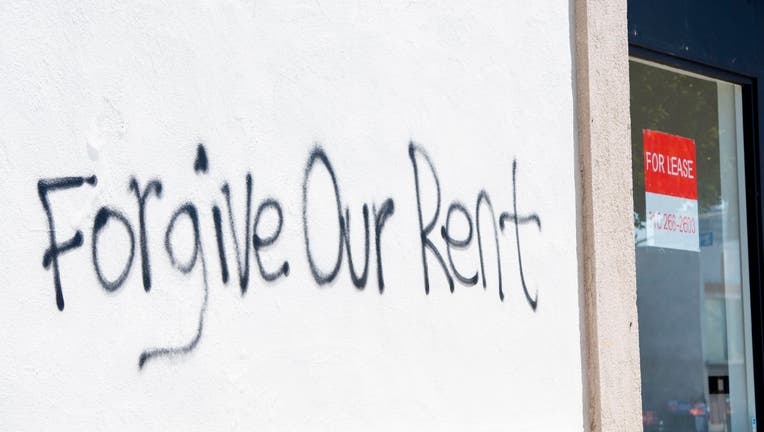 LOS ANGELES - The Los Angeles County Board of Supervisors voted Tuesday to spend up to $30 million on rent relief and extended a local moratorium on evictions for 30 days.

A motion co-authored by Supervisors Sheila Kuehl and Mark Ridley-Thomas originally recommended pulling up to $20 million in funding earmarked for affordable housing for a new rent relief program. That would have required relaxing a rule set by the board in 2015 that requires at least 75% of $100 million set aside for the Affordable Housing Programs Budget Unit be spent on new housing or renovations.

Supervisor Janice Hahn asked that the motion be amended to raise the amount to $30 million and to draw the money from coronavirus relief funds instead.

Kuehl and Ridley-Thomas -- who accepted the "friendly" amendment -- highlighted the risk of a significant uptick in homelessness due to the coronavirus pandemic.

"The Affordable Housing Programs Budget Unit did not contemplate an emergency on the scale of COVID-19. While we must maintain our commitment to the production of new, and preservation of existing, affordable housing we must also respond to this emergency,'' their motion stated.

Kuehl and Ridley-Thomas cited a May report by the UCLA Luskin Institute on Inequality and Democracy predicting that as many as 120,000 households with 184,000 children could find themselves unable to pay rent and evicted as a result of the COVID-19 pandemic.

The UCLA study used census data and unemployment claims to estimate that nearly 450,000 people living in Los Angeles County are unemployed and not receiving unemployment benefits.

"Even before the pandemic, the number of those who were precariously housed was shocking," said Gary Blasi, a UCLA professor emeritus of law who authored the report. "About 600,000 people in Los Angeles County lived in households where 90% of household income was being used to pay rent."

A moratorium on evictions is currently in force statewide, but will expire 90 days after Gov. Gavin Newsom declares the end of the COVID-19 emergency, unless earlier repealed by the state's Judicial Council. The council had planned to vote on lifting the order earlier this month, but suspended the vote, with Chief Justice Tina Cantil-Sakauye citing the need to give state legislators time to put relevant policies in place.

The Board of Supervisors voted to extend a countywide eviction moratorium to at least July 30 and asked the Department of Consumer and Business Affairs to come up with a detailed plan for phasing out the prohibition.

Hahn and Supervisor Kathryn Barger said they wanted to balance concerns for renters with sympathy for the economic pressure on landlords, who must pay their mortgages while unable to collect rents.

Hahn said she was getting calls from a number of landlords or groups who represent them.

"They're feeling like the economy has reopened, most businesses are open now and they feel like extending it another month will put undue pressure and burden on them," Hahn said. "There's two sides to this."

Landlords represented by the Apartment Association of Greater Los Angeles have sued the city of Los Angeles over its ban on evictions and rent increases, saying it violates their constitutional rights. The association said it was sympathetic to tenants suffering hardship, but that the ordinance allows even renters with the ability to pay to ignore their lease obligations.

Barger said that businesses successfully navigating or even thriving during the pandemic -- like some big-box retailers -- should not be allowed to delay paying rent, but noted that many smaller businesses -- like nail and hair salons -- have just gotten back to work.

She also warned of unintended consequences down the road.

"We did not waive property tax due dates," Barger said.

If landlords delay paying property taxes, the county could find itself with a cash flow problem in a year when it is already under financial pressure and searching for ways to cut costs. Property and sales taxes are the county's two primary sources of direct revenue.

However, the homeless population had already increased 12.7% year-over-year by late January, before job losses related to COVID-19, according to the latest point-in-time count numbers released by the Los Angeles Homeless Services Authority. Even at that time, county officials said the number of people losing access to housing daily was outpacing the roughly 200 people who were being housed each day in shelters, temporarily empty hotel and motel rooms and permanent supportive housing.

The LAHSA data also highlighted that Black county residents are four times as likely to be homeless. The county motion calls for rental assistance to be targeted to the lowest-income households who are the most at-risk of homelessness.

Last week, the city and county reached a settlement with the L.A. Alliance for Human Rights by agreeing to shelter and provide services for 6,000 more homeless people within 10 months. The county's commitment includes spending $300 million over five years to provide services to those 6,000 individuals.

The Kuehl/Ridley-Thomas motion did not lay out how rent relief dollars would be allocated, whether it would be paid to renters or directly to landlords, or how much any one household could be expected to receive or for how long. The board directed the Los Angeles County Development Authority to map out those details within 30 days.