LOS ANGELES - The Olvera Street Mexican Marketplace is a historic area located within El Pueblo de Los Angeles, commonly known as the birthplace of Los Angeles. However, businesses have felt the financial fallout from the COVID-19 pandemic due to little to no foot traffic or tourism.

Some businesses ended up going under, and others are fighting to stay afloat.

Cielito Lindo, one of the iconic taquerias on Olvera Street, has been open since 1934. The family business is a staple in the community, now run by three sisters. 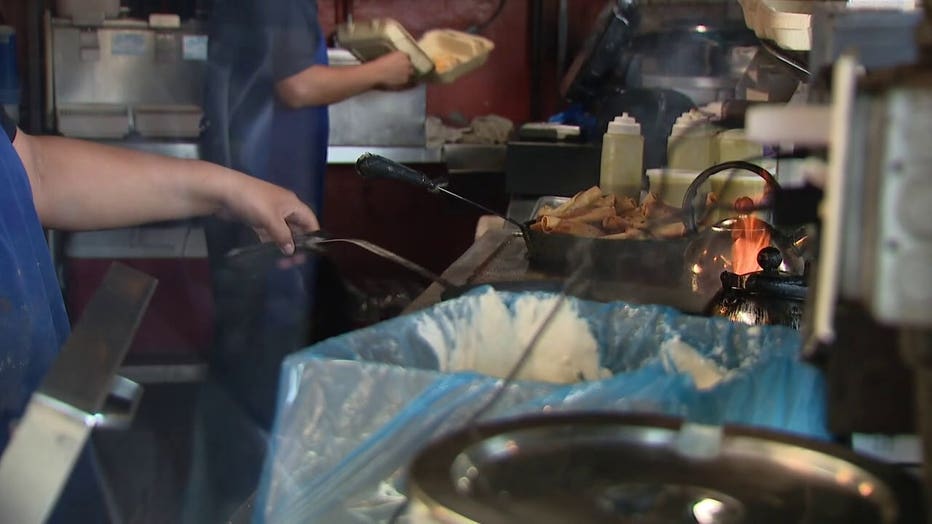 The women decided to welcome customers to a second location at 1806 N. Broadway, aiming to double their revenue and maintain their iconic restaurant in El Pueblo. The location was previously their warehouse and prep kitchen but is now open for to-go orders.

Cielito Lindo has a large customer base with people traveling for their tasty food from all over.

"We came all the way from Ontario just to eat their food," said Jennifer Casares and Lupe Medel.

"Since I was a kid, my mom and dad, one time they brought us, and it was over. Every two weeks we were here," said Oscar, who brought his daughters Bella and Gianna for her birthday.

The business owners at Cielito Lindo are hoping people will continue to support them at their locations.

Another issue impacting the area is the growing unhoused population. Los Angeles City Councilmember Kevin De Leon spoke to FOX 11 about the concerns.

"We have a bridge home complex on the parking lot and they're dependent on that parking lot for revenues. Obviously, during the past year, that parking lot wasn't utilized because we were all shut down. There was no business, no foot traffic whatsoever but now as we open up this economy, we want to make sure that they're not adversely impacted. We want to have an infusion of dollars from the state so we can start building housing, permanent housing as well as short-term housing. We need to do it quicker rather than later so we need to move with a sense of urgency," said De Leon.

The Councilmember said there is no immediate plan to relocate the individuals, however, he does plan to meet with merchants.

"We want to get ideas from the merchants. We want to hear from them, get their feedback as well. It's not going to be just 'Well, we want them [homeless community] to be gone' because it's not going to happen like that. We're going to have to work together because we have to work with the crisis that's before us. It's a moral crisis of our lifetime. We're going to be judged. Our generation will be judged on how we deal with our unhoused community members so it's a balancing act. How do we make sure folks come to El Pueblo and how can we coexist in the short term. There's no plan right now but first, we're going to have conversations, engagement, dialogue then we'll collectively figure this one out together," said De Leon.

Councilmember De Leon put forth a rent relief motion, asking rents to be waived to help protect businesses from January 2021 to June 2021.

"I'm also asking for strategies to help the businesses July forward to increase their businesses," he said.

De Leon said it is important to protect the historic area and to preserve the businesses too.

"It doesn't make a difference if you're Latino, African American, Asian American, Middle Eastern. It doesn't make a difference the color of your skin and who you are and where you come from, El Pueblo is our birthplace and we need to make sure we protect its merchants. The location has a very rich history, having been under the flags of Spain, Mexico and the United States so there's no question that we must preserve this cultural jewel that is the origin of modern Los Angeles," said De Leon.