The theme for this year's costume competition is architecture.

LOS ANGELES - Los Angeles City Hall comes alive with fashion Saturday for Metropolitan Fashion Week. It's a gala that celebrates design in both fashion and costume in the grand architectural setting of the City Hall arches. MetroFW is celebrating its 10th anniversary.

Its founder, Eduardo Khawam, says the venues are non-traditional. He launched in Seattle and held a show last weekend at the Museum of Flight there.

The LA show will feature a showcase by designer and Project Runway Season 10 winner, Dmitry Sholokhov.

Each year there's a costume competition. Last year's theme was pop art. Designer Erick Bendana of Nicaragua won. As Designer of the Year, he'll be in LA to show on the City Hall runway.

The theme for this year's competition is architecture. It's the feature of opening night Thursday at the Original Farmers Market, and the event is open to the public.

Khawam has quite the immigrant success story. He was born in Venezuela and his parents are from the Middle East. His mom is of Greek-Armenian ancestry and his father is from Syria. 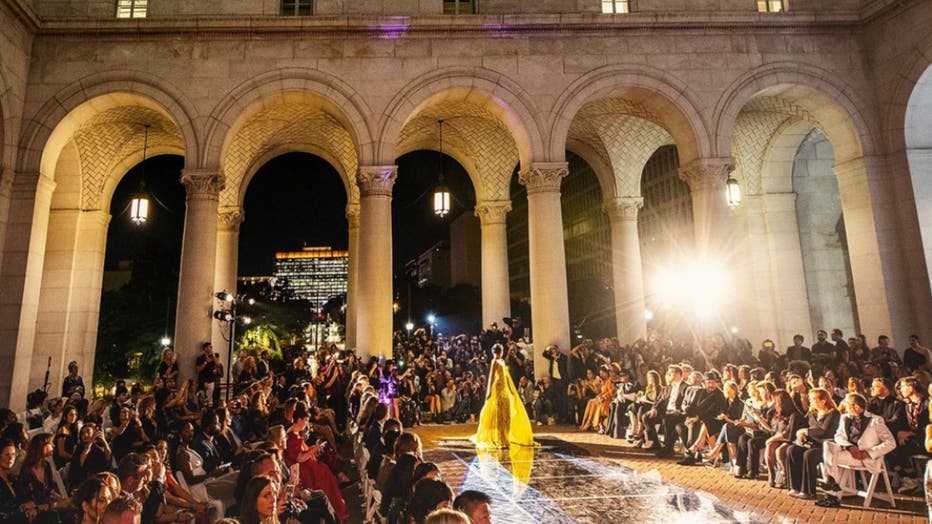 Khawan was living in Seattle when he started Metropolitan Fashion Week in a gym with just $200. It was a time when he said he had been discouraged and was thinking of leaving the U.S. He met a then-Senator Barack Obama at the gym who said words that changed his life. "Welcome to the U.S., we need immigrants like you."

The 2022 shows support Ukraine and Ukrainian refugees with funds being raised for the non-profit 'You Are The Angels.' Khawam says he got early support from Ukrainian designers. The Seattle show featured Ukrainian traditional clothing.

The gala at LA City Hall on Saturday is ticketed. FOX 11's Christine Devine will be emceeing the event, while Araksya Karapetyan will be modeling, wearing a designer from Armenia.