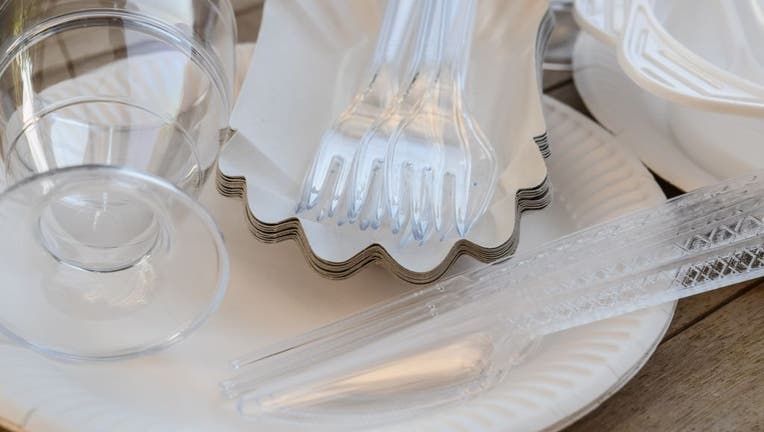 LOS ANGELES - The Los Angeles City Council Wednesday unanimously voted to begin the process to phase out single-use plastics at city facilities and city-sponsored events, as well as to take steps toward a potential citywide ban on polystyrene products such as Styrofoam.

"Our future in Los Angeles is plastics-free," said Councilman Mitch O'Farrell, one of the leaders of the motion. "Our phase-out of single-use plastics has been underway for years now through the plastic bag ban of about nine years ago to straws-upon-request about four years ago and plastic-utensils- upon-request just last year."

Wednesday's motion instructed the city attorney to draft an ordinance banning single-use plastic at city facilities and at events on city property. The Bureau of Sanitation will also develop an online zero waste training course that would be implemented for all city employees annually starting January 2023, and each city department would be instructed to develop zero waste plans by Sept. 30.

"The instructions before us today are another step in the long-term effort to reverse the profound damage and degradation to our environment that I've witnessed in my own lifetime with the profound, widespread use of plastics everywhere, which did not exist before the 1970s," O'Farrell said.

The motion also requested the city attorney to prepare two draft ordinances, which would require further analysis under the California Environmental Quality Act, to:

-- create a citywide ban on products made from expanded polystyrene, such as Styrofoam; and

-- expand the Single-Use Carryout Bag Ordinance to stores that give out such bags at the point of sale.

Councilman Paul Krekorian spoke about how the proliferation of plastic impacts Angelenos, saying, "look around your neighborhoods."

"In every neighborhood, in every district in this city ... you see the problem of litter. You see the piles of waste, single-use waste, building up in our gutters, in our parkways, in our parks, in our stormwater system, even to the point that it's causing the (Hyperion Water Reclamation Plant) to have catastrophic problems in disposing of our stormwater and our wastewater," Krekorian said.

Councilman Paul Koretz noted that microplastics are even found in rainwater.

The vote comes days after the city's ordinance aimed at reducing plastic waste expanded -- coinciding with Earth Day last Friday -- to all restaurants, making disposable foodware, including utensils and napkins, available at all city restaurants and beverage facilities only when requested by customers.

The ordinance was approved by the City Council in April 2021 and first went into effect last November, at first only applying to food and beverage facilities with more than 26 employees.

Facilities that violate the ordinance are subject to a written notice for the first and second violations, followed by a $25 fine for each subsequent violation. A facility's collective fines can not exceed $300 per calendar year.