Community continues to call for 3 LA City Councilmembers to resign

LOS ANGELES - Activists vowing to shut down Los Angeles City Council meetings until three members caught participating in a racially charged conversation about redistricting resign their seats won a battle Wednesday when the council was forced to cancel its regular session due to the vocal protesters in the chamber.

None of the three were in the council chamber Wednesday. Martinez announced Tuesday she was taking a "leave of absence."

Protesters again filled much of the council chamber Wednesday, holding signs and loudly chanting slogans such as "shut it down," reflecting their desire for the council to halt all of its business until the trio of council members resign their seats.

The White House is calling on three LA City council members to resign following racist comments made during a meeting last year.

Interim Council President Mitch O'Farrell called several recesses in hopes of quieting the crowd before the meeting could begin. But the protesters refused to relent. After about an hour, O'Farrell relented and announced that the meeting was being adjourned, with all items on the agenda postponed until Friday's scheduled meeting.

O'Farrell told reporters afterward that he was prepared to wait as long as it took to hold the meeting, but he said the council lost a quorum at 11 a.m. when Councilman Marqueece Harris-Dawson had to leave.

"The harm that has been done to Angelenos and this city requires that we be very patient," O'Farrell said.

He again called on the trio of council members involved in the recorded conversation to resign, calling it "personally and professionally frustrating" that they have yet to do so.

"It's holding us up from moving forward," he said.

Calls for resignations have been almost universal among city, state and federal elected officials -- including from President Joe Biden, who is due to arrive in Los Angeles Wednesday afternoon for a two-day visit.

Martinez on Monday resigned as council president, but she has resisted calls to resign her seat altogether. She announced a "leave of absence" on Tuesday, saying, "This has been one of the most difficult times of my life and I recognize this is entirely of my own making. At this moment, I need to take a leave of absence and take some time to have an honest and heartfelt conversation with my family, my constituents, and community leaders. I am so sorry to the residents of Council District 6, my colleagues, and the city of Los Angeles." 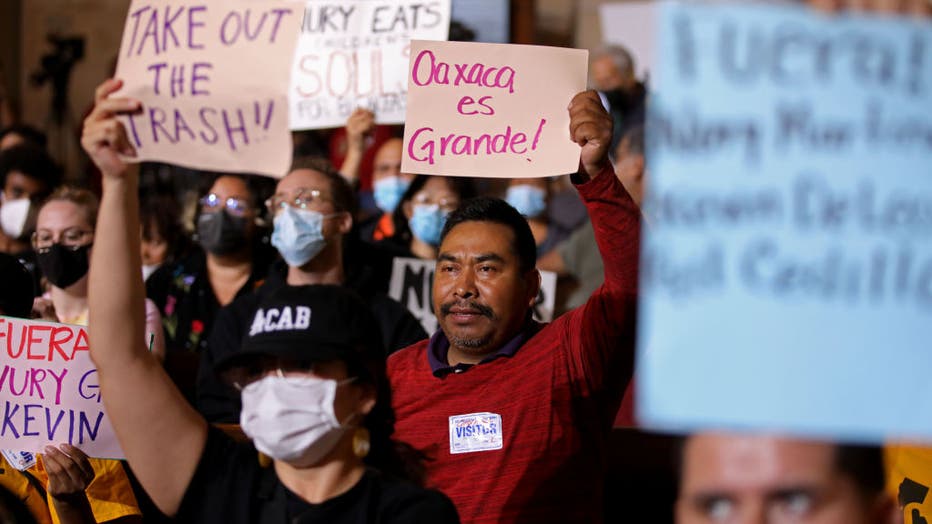 Martinez immediately came under fire following Sunday's release of the recorded conversation in which she made racist comments aimed at Councilman Mike Bonin's 2-year-old Black adopted son and at other ethnic groups while the group discussed the politically sensitive process of redrawing council district boundaries.

The recorded conversation was leaked, appearing on Reddit before being removed from the site. City News Service reviewed the conversation, but it was unclear who was responsible for the recording and its leak. The meeting apparently occurred at a Federation of Labor office, and the federation is investigating its source.

Martinez issued a statement Monday announcing her decision to surrender the council presidency, and apologizing to Bonin, his husband Sean Arian and their son.

With Martinez stepping down from her leadership role, O'Farrell, the council president pro tempore, was elevated to interim council president. He has since repeatedly called on Martinez, de León and Cedillo to resign.

White House press secretary Karine Jean-Pierre said Tuesday, "The president is glad to see one of the participants in that conversation has resigned, but they all should. He believes that they all should resign."

Rep. Maxine Waters, D-Los Angeles, said in a statement released Tuesday, she was "shocked" and "disappointed" at the remarks made in the recorded conversation.

"Their comments also included horrific details about efforts to weaken the political power of Black people across the city," Waters said.

"The community has spoken loud and clear. Council members Nury Martinez, Kevin de Leon and Gil Cedillo have demonstrated their racist sentiments, and while there has been resistance from these individuals to step down, the calls are much too overwhelming. I too, join in with others in calling for their resignation. That is what true accountability looks like, and our city cannot heal until that happens."

Martinez, 49, has served on the council since 2013 and represents the 6th District in the San Fernando Valley. She was just the second Latina to serve on the council and was the only female member of the council when she won election. Six years later, she became the first Latina to become president of the City Council when she was elected in 2019, replacing long-time President Herb Wesson.

Prior to joining the council, Martinez served on the San Fernando City Council from 2003 to 2009 and on the Los Angeles Unified School District Board from 2009 to 2013.

De León, 55, has been on the council since 2020 and made an unsuccessful run for mayor this year. He previously served in the state Senate and Assembly. Cedillo, 68, has been in office since 2013 but lost his bid for reelection this year. His term will expire in December, and he will be replaced by Eunisses Hernandez.

Among other comments in the recorded conversation, Martinez belittled Bonin, who is white and openly gay, and criticized his adopted Black son for his behavior at a Martin Luther King Day parade, saying the boy was misbehaving on a float, which might have tipped over if she and other women hadn't stepped in to "parent this kid."

"They're raising him like a little white kid," Martinez said. "I was like, `This kid needs a beatdown. Let me take him around the corner and then I'll bring him back."'

De León also compared Bonin's handling of his son at the MLK Parade to "when Nury brings her little yard bag or the Louis Vuitton bag."

"Su negrito, like on the side," Martinez added, using a Spanish term for a Black person that's considered demeaning by many.

At another point in the leaked conversation, Martinez recalls a conversation with businessman Danny Bakewell about possibly transferring Los Angeles International Airport out of Bonin's Council District and into that of Councilman Marqueece Harris-Dawson.

Martinez said she told Bakewell to "go get the airport from his little brother -- that little bitch Bonin."

On the subject of Councilman Mark Ridley-Thomas' suspension amid an indictment on federal corruption charges, Martinez said Controller Ron Galperin would decide whether Ridley-Thomas still gets paid.

"You need to go talk to that white guy," she says. "It's not us. It's the white members on this Council that will motherf--- you in a heartbeat."

Martinez also took aim at Los Angeles County District George Gascón in profane terms, after the group appeared to discuss whether Gascón would endorse Cedillo in his re-election campaign against Hernandez.

Gascón issued a statement late Sunday saying he was "saddened and disappointed" in the comments.

"I share the outrage of Council member Bonin as well as all members of the African-American community. Anti-Blackness has no place in Los Angeles," he said.

Martinez, de León, Herrera and Cedillo apologized separately on Sunday for their roles in the racially charged conversation.

"In a moment of intense frustration and anger, I let the situation get the best of me and I hold myself accountable for these comments. For that I am sorry," Martinez said in a statement provided to CNS on Sunday.

"The context of this conversation was concern over the redistricting process and concern about the potential negative impact it might have on communities of color. My work speaks for itself. I've worked hard to lead this city through its most difficult time."

De León said: "There were comments made in the context of this meeting that are wholly inappropriate, and I regret appearing to condone and even contribute to certain insensitive comments made about a colleague and his family in private. I've reached out to that colleague personally," he said.

"On that day, I fell short of the expectations we set for our leaders -- and I will hold myself to a higher standard."

Herrera's statement said: "The calls for accountability are loud clear and deserved. I recognize that the community and our affiliates deserved an apology earlier and I am sorry this has not been the case. I had to face my family and granddaughters personally and apologize to them for my failure to stand up to racist and anti-Black remarks in that immediate moment. I failed them in the moment and for that I hold the deepest regret.

"And now, I apologize to all of you, Mike Bonin and his family, the affiliates and community members, specifically those in the Black and Oaxacan community. There is no justification and no excuse for the vile remarks made in that room. Period. And I didn't step up to stop them and I will have to bear the burden of that cross moving forward," Herrera said. "I will do better and I hope that all of you can find it in your hearts to forgive me."

Cedillo issued a statement saying, "I want to start by apologizing. While I did not engage in the conversation in question, I was present at times during this meeting last year. It is my instinct to hold others accountable when they use derogatory or racially divisive language. Clearly, I should have intervened. I failed in holding others and myself to the highest standard. The hurtful and harmful remarks made about my colleague's son were simply unacceptable. We choose public life, but our families should always be off limits and never part of the political discourse."

Bonin and Arian tweeted a lengthy statement from the family Sunday calling for the council to remove Martinez as president and for her and de León to resign their seats entirely.

"We love our son, a beautiful, joyful child, and our family is hurting today," the statement continued. "No child should ever be subjected to such racist, mean and dehumanizing comments, especially from a public official. It is painful to know he will someday read these comments.

"We are equally angry and disgusted by the ugly racist comments about our son from Kevin de León and Ron Herrera, who should also resign their posts, and by the tacit acceptance of those remarks from Gil Cedillo. It hurts that one of our son's earliest encounters with overt racism comes from some of the most powerful public officials in Los Angeles."