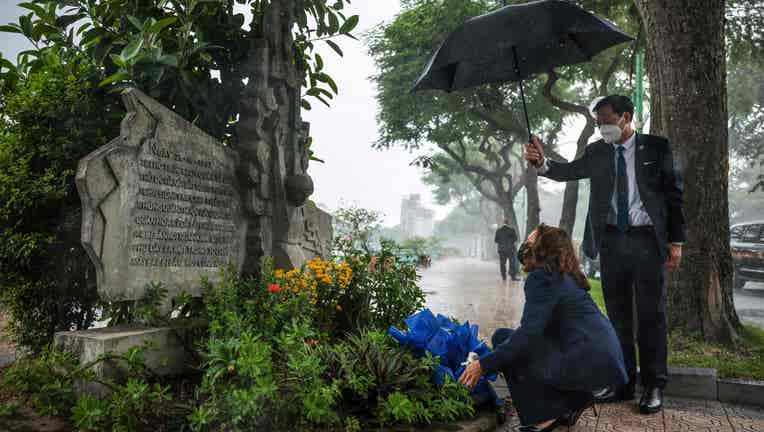 US Vice President Kamala Harris lays flowers at the Senator John McCain memorial site, where his Navy aircraft was shot down by the North Vietnamese, on the three-year anniversary of his death, in Hanoi on August 25, 2021. (Photo by Evelyn HOCKSTEIN

HANOI - Vice President Kamala Harris laid flowers Wednesday at the Hanoi memorial site where late Sen. John McCain was shot down in 1967 by the North Vietnamese when he was a Navy fighter pilot.

Standing in the pouring rain, Harris noted that Wednesday marked three years since McCain died from brain cancer on Aug. 25, 2018.

RELATED: VP Harris trip to Vietnam delayed due to report of Havana Syndrome

McCain was held as a prisoner of war for more than five years in Vietnam where he was sometimes tortured and kept in solitary confinement until his release in 1973.

He later represented Arizona in Congress, first in the House and then later in the Senate, from 1987 until his death.

McCain and President Biden met in the Senate and remained close friends for the rest of McCain’s life. Biden also eulogized McCain at his funeral.

Harris was in Singapore and Vietnam this week to reaffirm the U.S.’s commitment to the region and counter China’s influence there.

Harris also announced during one of the meetings that the U.S. would be donating an additional 1 million Pfizer coronavirus vaccine doses – on top of 5 million already donated -- to the country whose citizens are only 2% vaccinated.

Her visit falls against the backdrop of the U.S. military’s frantic effort to evacuate people from Afghanistan amid the Taliban’s takeover that occurred as Biden ordered troops withdrawn.