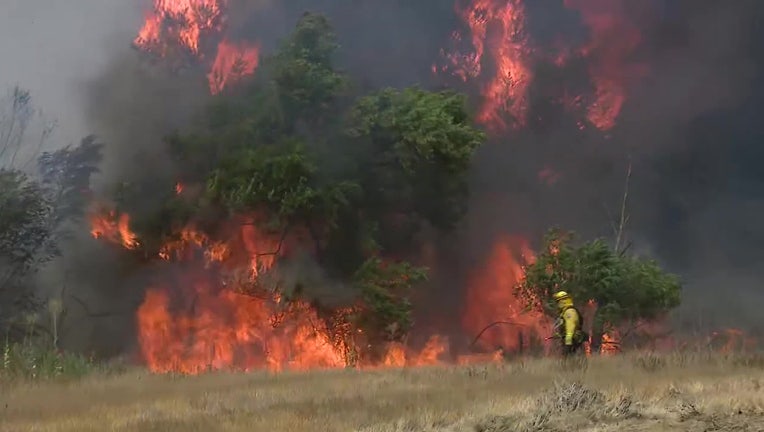 RIVERSIDE COUNTY, Calif. - Firefighters stopped the forward progress of a wildfire that broke out Thursday in the northwest corner of Riverside County.

Cal Fire and the Riverside County Fire Department responded to a call of a fire near Van Buren Boulevard and Jurupa Road in Jurupa Valley around 2 p.m.

Crews have contained about 40% of the fire, which covered about 30 acres.

Multiple engine and hand crews from the county, Corona and Riverside fire departments, as well as Murrieta Fire & Rescue, were sent to the location and encountered flames moving at a moderate rate through heavy vegetation. The fire jumped Van Buren from west to east, approaching transient camps and houses along Pedley Road. With the help of two Cal Fire water-dropping helicopters, crews stopped the fire's forward rate of spread about 5 p.m.

EVACUATIONS ORDERS NO LONGER IN EFFECT

The fire prompted evacuations for residents in the following areas before the orders were lifted:

There were no immediate reports of damage.

Crews were expected to remain on the fire lines overnight, mopping up. The cause of the fire was under investigation.