A NASA spacecraft got closer to Jupiter and its moon than ever before and captured some images.

Calling all stargazers! Jupiter reaches its biggest and brightest point in the night sky on Aug. 19.

The gas giant will be at opposition today, meaning it's directly opposite to the sun in Earth’s sky — rising in the east as the sun sets in the west. Jupiter will also make its closest approach of the year to Earth tonight — meaning, the planet will be well within naked-eye range and outshine any star in the night sky.

"August is perhaps the best time this year to enjoy viewing Jupiter and Saturn, as both planets reach opposition this month," NASA said in a blog post. Saturn reached opposition on Aug. 2.

The planet will be visible from sunset to sunrise and it reaches its highest point around midnight, according to NASA.

Jupiter will be especially easy to spot tonight with the naked eye since it will appear near the bright moon, according to EarthSky. But, telescopes users will get a treat looking at Jupiter’s moons and atmospheric bands, which can be viewed tonight through a telescope. 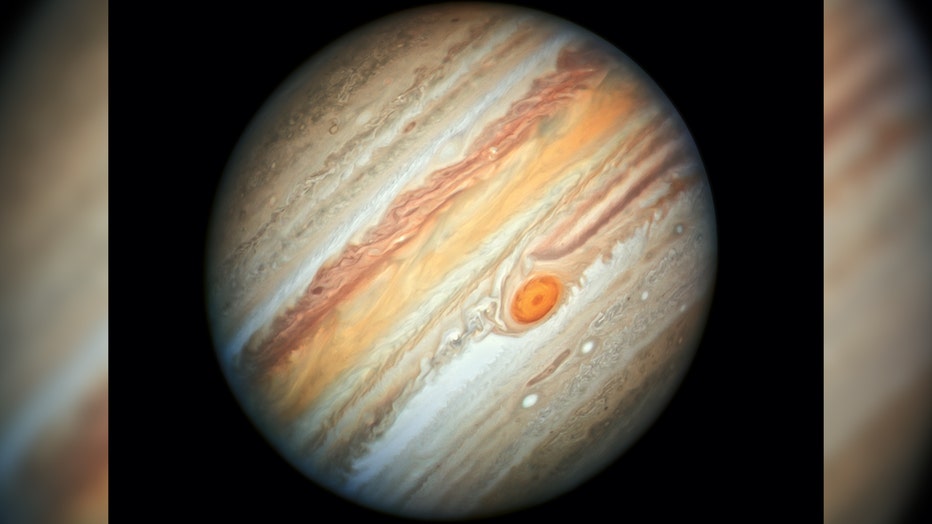 Jupiter will also make its closest approach of the year to Earth tonight.

Jupiter’s massive red storm will be visible near the center of the planet for viewers in the Northern Hemisphere around 9:34 pm E.T., according to Astronomy.

On Saturday, Aug. 21, stargazers can look for Jupiter lying above the moon. But this moon, August’s full moon, is called a "Blue Moon."

Normally a "Blue Moon" defines a second full moon that occurs in one calendar cycle. But the full moon in August is the only full moon of the month — but it’s called a "Blue Moon" because of an obscure old almanac rule.

Over the next few nights, Jupiter, Saturn and the moon will appear close together, the closest on Aug. 20. The trio will appear in the eastern sky as the sun sets in the western sky.