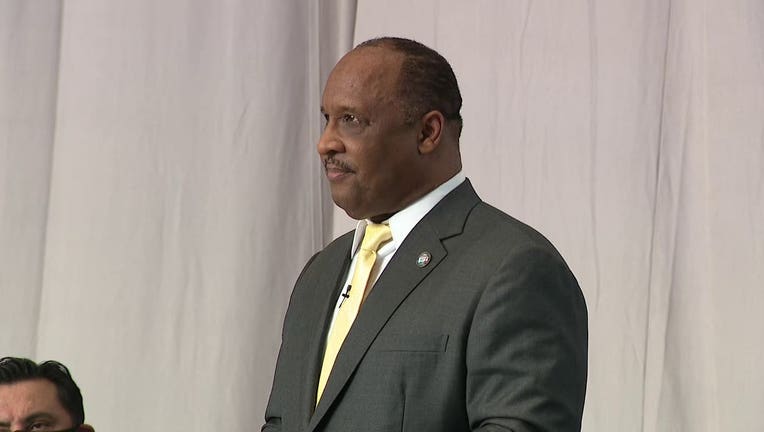 INGLEWOOD, Calif. - A judge said Monday he is inclined to trim portions of a lawsuit brought by a former girlfriend and executive assistant of Inglewood Mayor James T. Butts Jr. -- in which the woman sued the city, Butts and two other city officials, alleging she was wrongfully fired in 2019 and that the mayor acted "every bit like a Black Donald Trump."

Los Angeles Superior Court Judge Richard J. Burdge Jr. issued a tentative ruling dismissing Melanie McDade-Dickens' causes of action for sexual harassment, failure to investigate and prevent sexual harassment and retaliation, but said he wanted to examine further how much time she had to file her lawsuit.

McDade-Dickens brought her complaint on Jan. 25, and Mira Hashmall, an attorney for Butts and the city, argued that the law at the time gave the plaintiff only one year from July 2019 -- when she received a right-to-sue notice from the state Department of Fair Employment and Housing -- to file suit.

Lawyers for the plaintiff maintain she had three years to bring the case.

The judge also said he is leaning toward allowing McDade-Dickens to amend her complaint to further argue that her claim for negligent hiring, supervision and retention is not barred by government immunity.

The judge tentatively denied the defense's requests to dismiss her claims for harassment and discrimination and intentional infliction of emotional distress as well as a violation of the state Labor Code.

According to the lawsuit, the plaintiff's allegations concern the "disturbing actions of a scorned lover, who also happens to be the mayor of a burgeoning metropolis ... who uses his superior power and influence ... to seduce a trusted city employee, Melanie McDade-Dickens, to become romantically involved with him."

But after McDade-Dickens ended what was described as a consensual relationship, Butts, "acting every bit like a Black Donald Trump, targeting those who dare to rebuke him," conspired with city Human Resources Director Jose Cortes and City Manager Artie Fields to ruin her career by retaliating against and ultimately firing the plaintiff from the job that she loved, the suit alleges.

McDade-Dickens met Butts in 2010 and she volunteered to work on his mayoral campaign, the suit states. He initially asked her to serve as his office manager, but he was so impressed by her knowledge and organizational skill he promoted her his inner circle of advisers as part of his strategy committee, the suit states.

After Butts was elected mayor in 2010, he invited McDade-Dickens to be his executive assistant.

"In the beginning Butts is nurturing, loving and supportive, both personally and professionally," according to the suit.

But the relationship eventually descended "into one of abuse, abuse of power and sexual harassment," the suit alleges.

Hashmall previously said the lawsuit is "full of salacious fabrications, is a tactic designed to draw attention away from Ms. McDade's wrongdoing by smearing others. It will not work."

The city fired McDade-Dickens after allegations of fraud and criminal behavior came to its attention, according to Hashmall.