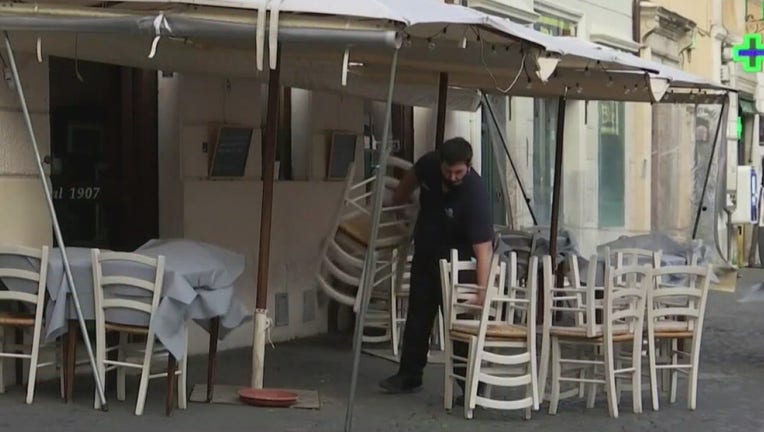 LOS ANGELES - Los Angeles County's ban on in-person dining will remain for at least another week, but while a judge declined to issue an order lifting the restriction, he directed county attorneys Wednesday to provide medical evidence about COVID-19 transmission being used to justify the ban.

Los Angeles Superior Court Judge James Chalfant appeared sympathetic to legal challenges brought against the county's ban by the California Restaurant Association and the owner of the downtown Engine Co. No. 28 restaurant, attorney Mark Geragos. But Chalfant said he was reluctant to issue an order that could have a major impact on public health without first reviewing scientific data about the danger of coronavirus transmission at an outdoor dining establishment.

The county Department of Public Health imposed the ban on Nov. 25, citing surging COVID-19 cases and hospitalizations. The county Board of Supervisors debated the issue on Nov. 24, but voted 3-2 to support the ban, arguing that restaurant patrons spend extended periods of time in close proximity and without wearing masks.

The California Restaurant Association and Geragos, however, challenged the ban in court.

"The recent order with no stated scientific basis from L.A. County singles out a specific industry and could jeopardize thousands of jobs," Jot Condie, president/CEO of the California Restaurant Association, said in a statement announcing the lawsuit last week. "There are thousands of restaurants and many thousands more employees who could be out on the street right before the holiday season."

The county's restriction on in-person dining is scheduled to remain in effect for three weeks, or roughly Dec. 16. Prior to the ban on outdoor dining being imposed, the county had already restricted restaurant patios to 50% of capacity.

Chalfant scheduled another hearing for 1:30 p.m. Tuesday, directing attorneys for the county to show up with medical evidence justifying the restriction on in-person dining. He noted that the ban is a departure from the state's coronavirus restrictions, which permit outdoor dining in counties that are in the most-restrictive "purple" tier of the California COVID monitoring system.

The ban has been met with an outcry from restaurant owners across the county, with some saying they spent thousands of dollars to establish safe outdoor dining spaces under the previous county guidelines, only to be forced to shut them down on Nov. 25 without justification. Restaurants in the county are now restricted to carry-out or deliver service.

Opponents of the ban have said it would cause tens of thousands of restaurant workers to lose their jobs. There are more than 30,000 restaurants in Los Angeles County.

RELATED: Los Angeles County restaurants can apply for up to $30,000 in financial relief amid new closure

The city of Long Beach, which maintains its own health department, aligned itself with the county and has also cut off in-person dining at restaurants. But Pasadena, which also has its own health agency, declined to follow suit, allowing outdoor dining to continue -- resulting in major increases in customers over the Thanksgiving weekend as county residents flocked to the city to take advantage.

Pasadena on Wednesday tightened its rules, allowing in-person dining to continue, but requiring that guests dine only with members of their own household -- a restriction that even city officials concede will be difficult to enforce.

The county's ban on outdoor dining was announced early last week, when the county's five-day average of daily new cases topped the threshold of 4,000. That average subsequently topped 4,500, triggering a targeted "Safer-At-Home" order that tightened capacity restrictions at other businesses and barred most gatherings of people from multiple households.

The county's COVID-19 case numbers, however, continue to rise. The county reported set a record on Tuesday by reporting nearly 7,600 new cases, while hospitalizations reached a pandemic-high of 2,316.