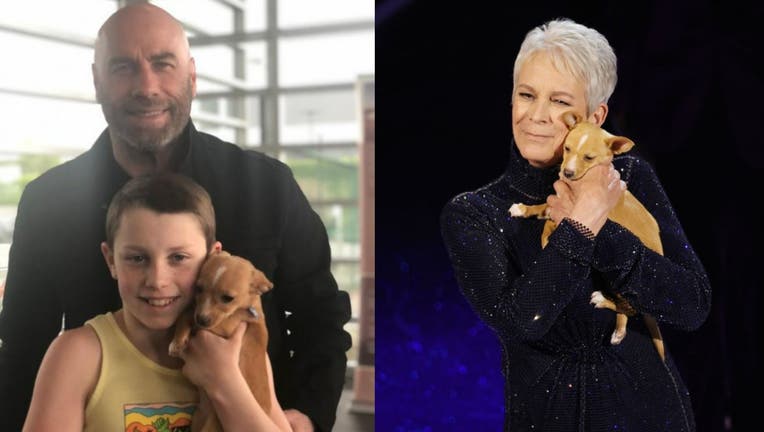 In an Instagram post Tuesday, actor John Travolta shared a photo of him and his 11-year-old son Ben Travolta, holding the pup.

Curtis gave remarks on White during In Memoriam segment of Sunday's 94th annual Oscars ceremony, highlighting the love the late actress had for animals.

"Day in, day out for almost a century she was a woman who cared so much for not just her two-legged friends but for animals just like this," Curtis said of White. "So the greatest gift you could give Betty White is to open your heart and adopt a rescue dog just like Mac N Cheese from Paw Works."

Just one day later, Mac N Cheese was with the Travoltas.

On her Instagram page, Curtis called it a "magical ending" to the story from Sunday, saying that someone had texted Curtis a picture of Travolta with Mac N Cheese after she'd left the ceremony Sunday.

"I thought it was so beautiful to see him with her and then today I found out that he and his son, Ben have adopted beautiful little Mac N Cheese and are taking her home today," she said, calling it "a perfect tribute to Betty White."

White died on Dec. 31, 2021, at her home in Brentwood. Since her death, her animal-loving legacy has been honored countless times, including $243,000 in donations to the Los Angeles Zoo — a phenomenon zoo officials called the "Betty White effect."