Speaking at the White House, Biden sharply criticized the roughly 80 million Americans who are not yet vaccinated, despite months of availability and incentives.

FARGO, N.D. - An executive at the largest health care system in North Dakota said its hospitals in Fargo could use up to 300 additional nurses to handle COVID-19 cases and is bumping up incentives to fill the void.

"We really are in crisis," said Dr. Doug Griffin, Sanford Health vice president and medical officer in Fargo, which serves a metropolitan area of about 250,000 people in North Dakota and Minnesota.

Hospitals across the region are filling up with both COVID-19 and non-COVID-19 patients, Griffin said. Fargo Sanford is about two to three weeks from reaching its peak hospitalization capacity.

Besides nurses, the system is short-staffed in patient services, respiratory therapy and even "people who draw blood," Griffin said. 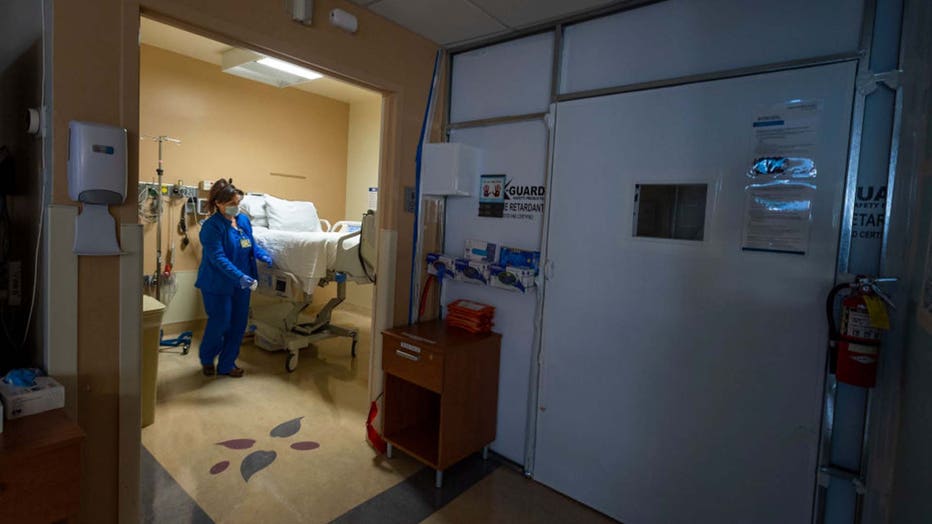 RELATED: Marin County prepares for a 5th pandemic wave while beginning to switch to an endemic response

Meanwhile, 22 counties, all in the eastern third of the state and all of them connected, have vaccination rates of at least one dose between 50% and 60%. Of the remaining 31 counties, only two have rates above 50%, with many much lower than that, according to the North Dakota Department of Health.

"We clearly have more vaccine hesitancy in the western part of the state," said Sanford. "I think there’s a much more frontier, independent nature and philosophy out there. Politics are part of it, but I think it’s more they don’t want to be told what to do. But really, I’m not sure I have a good answer for that."

That’s translating to higher incidences of COVID-19 in the western part of a state that the U.S. for Centers for Disease and Prevention Control rates 45th in the country in percentage of fully vaccinated people.

The five counties with the highest number of cases per capita in the last two weeks, according to Johns Hopkins University researchers, are Emmons, Stark, McKenzie, Mountrail and Burleigh, all west of Jamestown. The vaccine coverage in Emmons is less than 38%, Stark is less than 37% and McKenzie is just over 33%.

North Dakota is not the only state with a buckling hospital system and poor vaccination rates.

"In honor of Ray, please get vaccinated if you have not, in an effort to free up resources for non-COVID related emergencies," his family pleaded in his obituary.

In Hidalgo County, Texas, along the Mexican border, about 50 patients were in the hospital with COVID-19 on a given day in July. By early August, the number had soared to over 600.

"Back in July we were almost celebrating. Little did we know," said Ivan Melendez, public health authority for Hidalgo County. The situation has improved, with just under 300 people in the hospital as of Monday, but ICUs are still above 90% capacity, Melendez said.

The biggest surge over the summer occurred in states that had low vaccination rates, particularly in the South, where many people rely on air conditioning and breathe recirculated air, said Linsey Marr, a professor of civil and environmental engineering at Virginia Tech. She said states farther north could see upticks as the onset of cold weather sends people indoors.

Vaccination rates are not as low in some Northern states, but "there’s still a lot of unvaccinated people out there. Delta is going to find them," Marr said.

The country has seen COVID-19 deaths and cases climb back to levels not seen since last winter, erasing months of progress and potentially bolstering President Joe Biden’s argument for his sweeping new vaccination requirements.

The cases — driven by the delta variant combined with resistance among some Americans to get the vaccine — are concentrated mostly in the South.

While one-time hot spots like Florida and Louisiana are improving, infection rates are soaring in Kentucky, Georgia and Tennessee, fueled by children now back in school, loose mask restrictions and low vaccination levels.

The dire situation in some hospitals is starting to sound like January's infection peak: Surgeries canceled in hospitals in Washington state and Utah. Severe staff shortages in Kentucky and Alabama. A lack of beds in Tennessee. Intensive care units at or over capacity in Texas.

The deteriorating picture nine months into the nation's vaccination drive has angered and frustrated medical professionals who see the heartbreak as preventable. The vast majority of the dead and the hospitalized have been unvaccinated, in what has proved to be a hard lesson for some families.

The U.S. is averaging over 1,800 COVID-19 deaths and 170,000 new cases per day, the highest levels respectively since early March and late January. And both figures have been on the rise over the past two weeks.

Catherine Park contributed to this report.