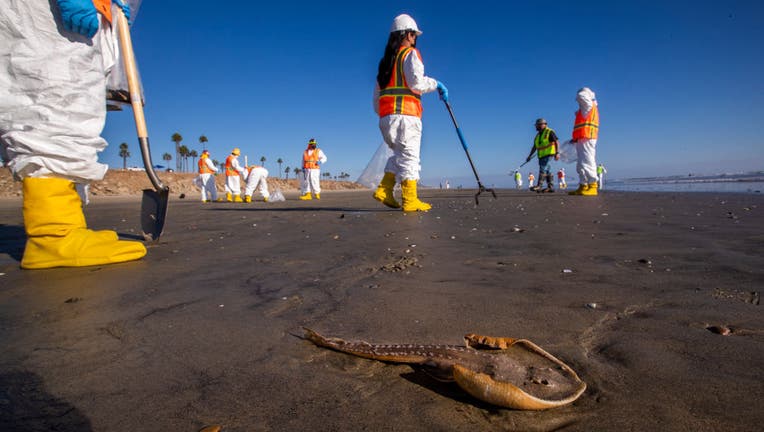 Huntington Beach, CA - October 05: One of two dead juvenile guitar fish lies on the beach, awaiting the arrival of biologists for inspection as environmental oil spill cleanup crews pick up chucks of oil left on the beach from a major oil spill at Hu

HUNTINGTON BEACH, Calif. - Five weeks after a ruptured underwater pipeline spilled crude in the waters off Huntington Beach, cleanup crews have cleared about a third of the shoreline and the amount of oily waste collected is tapering, an official said Friday.

Fisheries remain closed and aren’t likely to reopen before the final week of the month, said Lt. Christian Corbo of the state Department of Fish and Wildlife.

Crews have removed upward of 500,000 pounds (227,000 kilograms) of tar balls, as well as oil-tainted sand, seaweed and driftwood. The amount of oily debris collected each day has tapered off, and more than a third of the shoreline is nearing final cleanup approval.

The spill confirmed Oct. 2 from a pipeline owned by Houston-based Amplify Energy leaked up to about 25,000 gallons (94,635 liters) of crude off the coast of Orange County. Oil washed ashore, tarring the feathers of dozens of birds and leading to rescues of marine mammals, though it wasn’t as bad as environmentalists feared.

Huntington Beach has reopened its shoreline, just over a week after a massive oil spill. (October 11, 2021)

While beaches and harbors opened soon after the spill, fisheries remain closed to protect public health while testing is underway of fish collected in the area.

A lab testing for trace levels of hydrocarbons received samples of 350 fish this week, Corbo said. The testing will take almost three weeks. If no sign of contamination is found, it could take a few additional days for officials to sign off on reopening the fisheries.