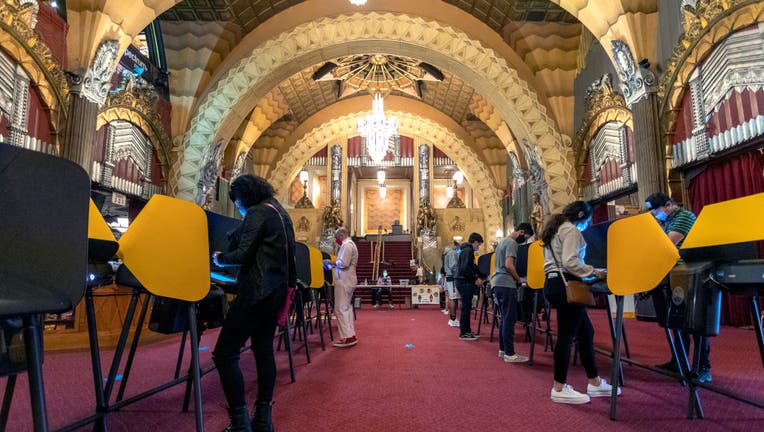 LOS ANGELES, CA - NOVEMBER 03: People vote inside the historic Hollywood Pantages Theatre on November 3, 2020 in Los Angeles, California. After a record-breaking early voting turnout, Americans head to the polls on the last day to cast their vote for

The coronavirus pandemic transformed Election Day into election month for many places in California after the state mailed ballots to all active registered voters for the first time, encouraging them to vote early and skip in-person polling places to avoid spreading the virus.

That gave more than 22 million people 29 days to vote, changing the behavior of voters and campaigns alike. Nearly 12.8 million people voted before Tuesday, signaling what could be a record turnout.

Most people who waited until Tuesday had far fewer polling places to use and had to wear masks to cast ballots from socially distant voting booths. Local officials in the state’s largest counties used sports arenas as polling places to accommodate crowds.

In Los Angeles, however, voters were breezing into a voting center at Dodger Stadium. More than half of Los Angeles County voters had cast ballots in advance.

Santa Cruz County tweeted at late morning that there were no lines at its centers.

In Orange County, voter Wendy Vo, 48, cast her ballot at a Fountain Valley center where there was only a short line. She said she didn’t want to say who she chose for president, fearing for her safety because of how contentious the race had become.

"It’s just a virus. It’s something you can’t escape," she said.

Californians are expected to deliver a strong rebuke of Donald Trump’s presidency while weighing in on a dozen statewide ballot measures that could overhaul property tax formulas, overturn a prohibition on affirmative action and redefine the billion-dollar business models of ride-hailing companies Uber and Lyft.

There was little drama at the top of the ticket, as Democrat Joe Biden and his running mate, California Sen. Kamala Harris, were expected to continue Democrats’ winning streak in the Golden State and take its bounty of 55 electoral votes.

Democrats have won California in every presidential election since Bill Clinton in 1992, and 2020 marks the first time a California Democrat has been on the national ticket.

Polls show Trump is on track for another drubbing here. He lost California by more than 4 million votes to Hillary Clinton in 2016.

California Republicans are more focused on reclaiming some U.S. House seats after a string of losses two years ago. That included four districts that contain either all or parts of Orange County, a one-time Republican stronghold. Republicans now hold just seven of the state’s 53 House seats.

Among the tightest contests: The 25th District north of Los Angeles, where GOP Rep. Mike Garcia is again trying to hold off Democrat Christy Smith after defeating her in a May special election for a seat left open by Democrat Katie Hill’s resignation amid a House ethics probe involving sexual misconduct. Also, the 21st District in the Central Valley, where former Republican Rep. David Valadao is trying to reclaim his seat from Democratic Rep. TJ Cox, who defeated Valadao by 862 votes in 2018.

Republican Darrell Issa has moved to a neighboring district to try to get back into the U.S. House. The former longtime congressman left office in 2018 and now is running in the 50th District mainly in San Diego County. The seat was left open when GOP Rep. Duncan Hunter pleaded guilty to a corruption charge and resigned.

With so much emphasis on voting by mail this year, the state Legislature changed the law to allow ballots to be counted even if they are received at county election offices up to 17 days after Election Day. But only ballots postmarked by Tuesday will be counted.

Millions of ballots arrive on or after Election Day, meaning the fate of many close races won’t be known for days or weeks. Some of the dozen statewide ballot propositions are likely to be among the closest races and won’t be determined on Election Day.

This year’s crop of ballot measures was the most expensive ever, fueled by an intense struggle between business and labor groups over the future of app-based ride-hailing and delivery companies.

At stake is a 2019 law that requires companies like Uber, Lyft and DoorDash to treat their drivers as employees, guaranteeing them benefits like overtime, sick leave and expense reimbursement. The companies underwrote Proposition 22 to try to keep their business model that treats drivers as independent contractors.

The companies raised about $200 million to campaign for the measure, while labor unions raised more than $20 million to fight it. A state appeals court has ruled Uber and Lyft must comply with the law, likely making Proposition 22 their last hope.

Voters also will decide whether to raise commercial property taxes by up to $12.5 billion per year by triggering a new assessment every three years, with some exemptions for smaller companies. The measure would overhaul California’s famous Proposition 13, the landmark 1978 initiative that has limited property tax increases to 2% each year unless the property is sold. If approved, the changes would not apply to homes.

Supporters have framed the debate around increasing funding for schools and local governments, who rely primarily on property taxes to pay for their services. Opponents have decried the proposition as a job-killing tax hike in the middle of a pandemic-induced economic downturn.

Other ballot measures include allowing 17-year-olds to vote in primaries if they turn 18 by the general election, ending the state’s system of cash bail, further restricting the data tech companies can collect from consumers and undoing some criminal sentencing and supervision changes that critics say are too favorable to criminals.

One of the more emotional measures on the ballot is Proposition 16, which would end the state’s ban on affirmative action programs for government hiring and contracting and admissions to public colleges and universities. The state’s Democratic-controlled Legislature put it on the ballot this year, believing the racial justice protests since the killing of George Floyd in Minneapolis in May made it the right time to end the ban.

In the state Legislature, Democrats are expected to maintain their supermajorities in both the state Assembly and Senate.