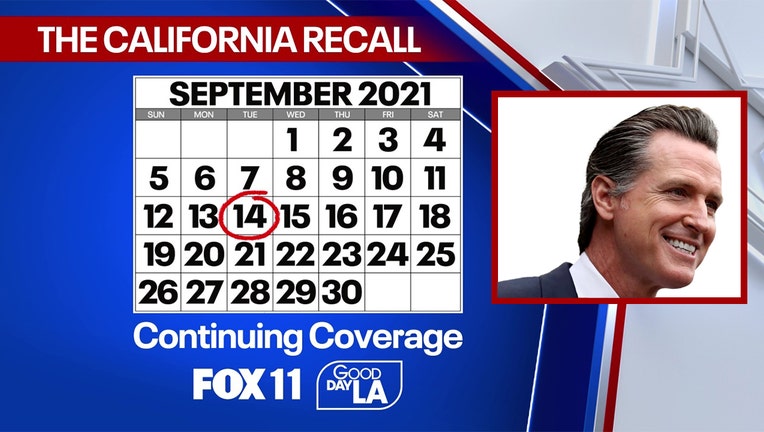 LOS ANGELES - California will hold a recall election Sept. 14 that could remove first-term Democratic Gov. Gavin Newsom from office. The date was set by Lt. Gov. Eleni Kounalakis, a Democrat and Newsom ally, after election officials certified that 1.7 million valid petition signatures had been turned in to qualify the election for the ballot. Republicans are hoping for an upset in a heavily Democratic state where the GOP hasn’t won a statewide election since 2006. The election will be watched nationally as a barometer of the public mood heading toward the 2022 elections, when a closely divided Congress again will be in play. Here’s how it works:

WHAT IS A RECALL ELECTION?

California is one of 20 states that have provisions to recall a sitting governor. The state law establishing the rules goes back to 1911 and was intended to place more power directly in the hands of voters by allowing them to remove elected officials and repeal or pass laws by placing them on the ballot. Recall attempts are common in the state, but they rarely get on the ballot and even fewer succeed. However, in 2003, Democratic Gov. Gray Davis was recalled and replaced by Republican Arnold Schwarzenegger.

WHY IS THERE A RECALL DRIVE AGAINST NEWSOM?

The answer is simple and complicated.

The simple part: Californians grew angry during the pandemic. Whipsaw stay-at-home orders by Newsom, crushing job losses from business closures, shuttered schools and the disruption of daily life soured just about everybody. Many of life’s routines were cut off at some point if not altogether, whether trips to the beach or lunches at a favorite burger joint.

The complicated part: In a state with nearly 40 million people there are many grievances, from California’s wallet-sapping taxes to a raging homelessness crisis. As governor, Newsom is a ready target for that resentment.

He is also being hit by fallout from a multibillion-dollar fraud scandal at the state unemployment agency while weathering a public shaming for dining out with friends and lobbyists at an exclusive restaurant last fall, while telling residents to stay home for safety.

HOW DOES THE ELECTION WORK?

Voters will be asked two questions: First, should Newsom be removed, yes or no? The second question is a list of replacement candidates from which to choose. If a majority of voters approve Newsom’s recall, the candidate who gets the most votes becomes governor. If Newsom is recalled, it’s likely his replacement could be elected with just a fraction of the votes. With dozens of candidates dividing those ballots it’s possible a winner could get 25% or less.

WHAT REPLACEMENT CANDIDATES HAVE ENTERED THE RACE?

There are 41 names on the preliminary list of qualified candidates. The 21 Republican candidates include Kevin Faulconer, the former San Diego mayor; businessman John Cox, who was trounced by Newsom in 2018; former Sacramento-area Congressman Doug Ose; Caitlyn Jenner, a reality TV personality and former Olympian; and Assemblyman Kevin Kiley. But the field remains unsettled: Conservative talk show host Larry Elder, a Republican, is challenging a state decision to reject his candidacy. The secretary of state’s office says Elder filed incomplete tax returns that are required to run, but he denies that and is promising a court challenge. "I’m going to win this," Elder says of the dispute.

Meanwhile, Faulconer says he’s filing a lawsuit against the Democratic Secretary of State, Shirley Weber, after the office blocked him from identifying himself on the ballot as the "retired" San Diego mayor. His campaign says regulations don’t prohibit use of the word. In a similar dispute over ballot language earlier this month, Newsom lost a bid to list his Democratic Party affiliation on the ballot, after his campaign missed a deadline.

There are eight Democrats, nine independents, two Green Party members and one Libertarian. No Democrat with political stature decided to run on the replacement list. Ballots start going out in the mail next month.

WHAT ARE CANDIDATES PROMISING?

Faulconer has proposed ending the state income tax for individuals making up to $50,000 and households up to $100,000 as part of a plan to make the state more affordable for the middle class. Cox has sought to gain attention by campaigning with a 1,000-pound Kodiak bear, which he said represented the need for "beastly" changes in the state. Elder has been promising to bring a fresh eye and common sense to Democratic-dominated Sacramento. Kiley has said he would immediately end the pandemic state of emergency, which would automatically wipe out all state and local orders issued under it.

WHAT IS NEWSOM SAYING ABOUT THE RECALL?

For months, Newsom steered around questions about a possible recall election, saying he wanted to focus on the coronavirus, vaccinations and reopening schools. But in March, he launched an aggressive campaign strategy, fundraising, running ads attacking the recall and doing national TV and cable interviews. He has acknowledged that people were anxious and weary after a difficult year dealing with the virus and restrictions.

Newsom, who was elected in a 2018 landslide, sees the recall as an attack on California’s progressive policies. Democrats say the effort to remove him is being driven by extremists and supporters of former President Donald Trump. The recall is backed by state and national Republicans, but organizers argue they have a broad-based coalition, including many independents and Democrats.

The governor spent much of 2020 on the defensive. But he has benefitted from a record state budget surplus that allowed him to tour the state to announce vast new spending programs, including $12 billion to fight homelessness; checks up to $1,100 for millions of low and middle-income earners who struggled during lockdowns; and $2.7 billion to pay for all of the state’s 4-year-olds to go to kindergarten for free.

HOW PRECARIOUS IS NEWSOM’S HOLD ON HIS JOB?

In the depths of the pandemic, Newsom’s popularity was tumbling and he appeared imperiled, with widespread unrest over long-running school and business closures. Many business owners were infuriated by what they saw as Newsom’s heavy-handed restrictions that had some open and close several times. Others rebelled against mandatory mask-wearing rules.

But a reopened economy and the astounding windfall of tax dollars helped him recover his standing. Recent polls have shown him surviving the recall, although those same surveys reveal signs of an unsettled public. Independent voters, for example, tend to view Newsom’s job performance skeptically, and most say the state is going in the wrong direction.

When Newsom fully reopened the state on June 15 virus cases were near record lows. But since then, cases have been rising, mainly among the unvaccinated. Los Angeles County re-imposed a mandatory mask order when people are indoors at public places, even if they’re vaccinated. California also is requiring K-12 students to wear masks when they go back to classrooms for the next school year. Such an order could hurt Newsom, especially among those who felt he didn’t do enough to reopen classrooms last year.

Still, Newsom is aided by the fact California is one of the most heavily Democratic states in the country. Democratic voters outnumber Republicans by nearly 2 to 1, and the party controls every statewide office while dominating the Legislature and congressional delegation.