WASHINGTON - The U.S. House of Representatives is moving toward a final vote on the $1.9 trillion COVID-19 relief plan this week, which could send the bill to President Joe Biden’s desk to be signed into law before unemployment benefits expire on Sunday.

The Senate on Saturday approved the massive rescue package on a party-line 50-49 vote. The House received the package Tuesday, which includes $1,400 stimulus payments for many Americans, and was set to take procedural steps to move toward a final passage vote on Wednesday morning, Majority Leader Steny Hoyer’s office said.

The Senate version of the rescue package narrowed unemployment benefits and stripped out an increase of the federal minimum wage to $15 an hour. Over the weekend, the chair of the Congressional Progressive Caucus, representing around 100 House liberals, called the Senate’s weakening of some provisions "bad policy and bad politics."

Biden says he would sign the measure immediately if the House passed it. The legislation would allow many Americans to receive the $1,400 direct checks from the government this month.

The Senate version of the bill also includes vast piles of spending for COVID-19 vaccines and testing, states and cities, schools and ailing industries, along with tax breaks to help lower-earning people, families with children and consumers buying health insurance.

RELATED: In hopeful sign for economy, US adds 379,000 jobs in February

The huge measure — its total spending is nearly one-tenth the size of the entire U.S. economy — is Biden’s biggest early priority. It stands as his formula for addressing the deadly virus and a limping economy, twin crises that have afflicted the country for a year.

Besides stopping the pandemic and jumpstarting hiring, money in the rescue package is supposed to start fixing income inequality, halve child poverty, feed the hungry, save pensions, sustain public transit, let schools reopen with confidence and help repair state and local government finances. And Biden is betting that the government can do all of this with the speed of a nation mobilizing for war without touching a tripwire of inflation.

"People have lost faith government can do good for them," says Senate Majority Leader Chuck Schumer, who spoke daily with Biden while ushering the bill through the Senate last weekend.

Now, as vaccines become more available and other changes take place, "people are going to see that government actually is making their lives better — which is how Americans used to think of it, and we’ve gotten away from it."

Saturday's vote was also a crucial political moment for Biden and Democrats, who need nothing short of party unanimity in a 50-50 Senate they run because of Vice President Kamala Harris' tiebreaking vote. They also have a slim 10-vote House edge.

Not a single Republican backed the bill in the Senate or when it initially passed the House, underscoring the barbed partisan environment that's so far characterizing the early days of Biden's presidency.

Republicans say Americans have plenty of reason to be skeptical, calling the American Rescue Plan excessive and wasteful. They warn the sweeping package will run up the national debt to precarious new heights after $4 trillion in aid has already been provided.

Senate Republican leader Mitch McConnell argues against the package as missing the moment — too big at a time when the virus is showing signs of easing and the economy is poised to come "roaring" back.

Instead of working across the aisle toward unity, as Biden has promised, McConnell says Democrats are "ramming through what they call ‘the most progressive domestic legislation in a generation,'" quoting the White House chief of staff.

"They explained their intent very clearly: to exploit this crisis as ‘a tremendous opportunity to restructure things to fit our vision,'" McConnell says. This is the first COVID-19 bill that had zero support from Republicans in the House or Senate.

A small but pivotal band of moderate Democrats leveraged changes in the bill that incensed progressives, not making it any easier for Speaker Nancy Pelosi, D-Calif., to guide the measure through the House. 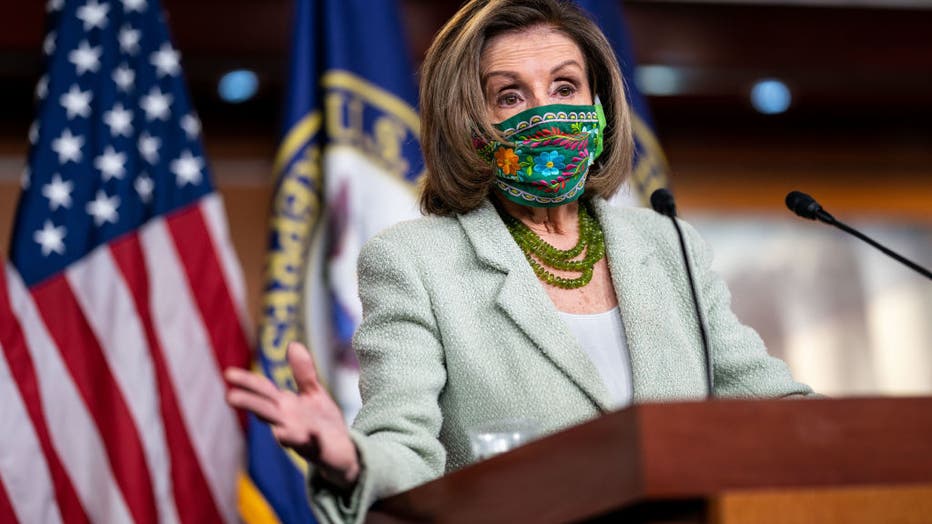 Under the compromise, $300 weekly emergency unemployment checks — on top of regular state benefits — would be renewed, with a final payment made Sept. 6. There would also be tax breaks on some of those payments, helping people the pandemic abruptly tossed out of jobs and risked tax penalties on the benefits.

The House's relief bill, largely similar to the Senate's, provided $400 weekly benefits through August. The current $300 per week payments expire March 14, and Democrats want the bill on Biden's desk by then to avert a lapse.