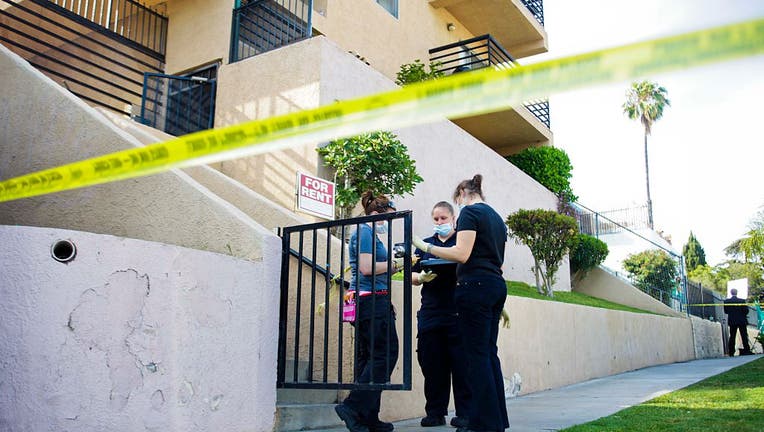 The crime scene where an 11-year-old boy was stabbed to death on Memorial Day is photographed and measured. (Photo by Bethany Mollenkof/Los Angeles Times via Getty Images)

LOS ANGELES - The Los Angeles Police Department said that 300 homicides have occurred so far in the city in 2020 -- a number not seen in over a decade.

In an effort to stem the rising number of homicides, the department urged the public to report any useful information to Crimestoppers, a safe and anonymous way to report a crime.

"A number we have not seen in over a decade -- 300 homicides in a year. Senseless violence & tragic loss of life,'' the LAPD tweeted. "Our people are doing everything they can to stop the violence, but we need your help. If you have any info, report it. You can remain anonymous. http://lacrimestoppers.org.''

If an arrest is made in connection with the crime, the reporting party may be able to collect a cash reward.

"I am HEARTBROKEN!!'' LAPD Deputy Chief Emada Tingirides tweeted. "It's has been a tragic weekend in Los Angeles to include the murder of a 17 year old riding his motorcycle close to his home. A Weekend like this creates Lasting Trauma in Communities. Praying for South Los Angeles. #WeMustComeTogether.''