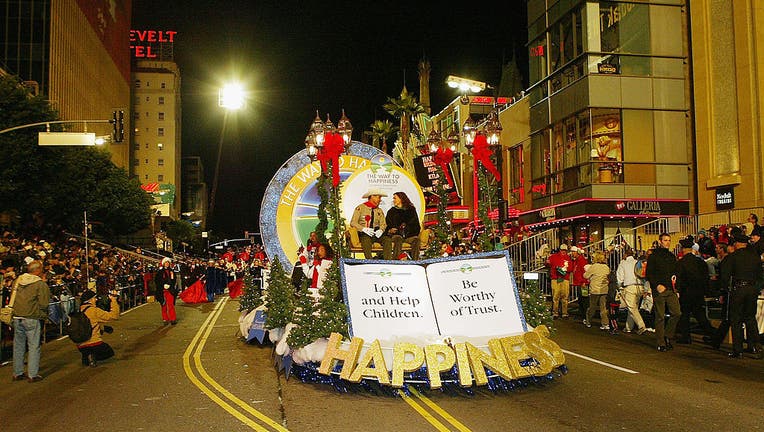 LOS ANGELES - After a hiatus in 2020 because of the pandemic, the Hollywood Christmas Parade returns Sunday night, moving through the streets of Tinseltown with its 89th edition to mark an unofficial start to the holiday season.

"For almost a century, the annual Hollywood Christmas Parade has been lifting the spirits of Angelenos from all walks of life," said Los Angeles Mayor Eric Garcetti. "After a difficult year and a half, I am excited Angelenos will get to enjoy this parade once again."

In all, 61 celebrities and VIPS were scheduled to take part, including musicians Marilyn McCoo and Billy Davis Jr. of The Fifth Dimension, and actors Danny Trejo, Tom Arnold and Lou Ferrigno, as well as Jerry Mathers and Tony Dow from early TV's "Leave It to Beaver."

After a hiatus in 2020 because of the pandemic, the Hollywood Christmas Parade returns Sunday night, moving through the streets of Tinseltown with its 89th edition to mark an unofficial start to the holiday season.

In addition, spectators will see 49 movie and TV cars, including "Back to the Future" DeLoreans, the "Ghostbusters" Ecto-1 and "Smokey and the Bandit" Trans-Am; and from TV, the "Munsters" coach, the "Rockford Files" Firebird and the "Magnum, P.I." Ferrari.

Oh, and the Idaho Potato Truck Tour will bring an 18-wheeler showing off a two-story-tall, two-ton spud.

Of course, the parade will conclude with an appearance by Santa Claus himself, along with his reindeer.

Officials last week urged spectators to enjoy this year's return -- but to remember to take precautions, as COVID has not gone away.

"After a very difficult 20 months, and that is putting it lightly, for all of us, this weekend, once again, Hollywood will serve as the backdrop to a beloved holiday tradition here in the City of Angels -- the 89th annual Hollywood Christmas Parade," L.A. City Councilman Mitch O'Farrell, whose 13th District includes Hollywood, said at a news conference last week.

"There's going to be more than 10,000 people watching this parade in- person," O'Farrell said. "So let's take those precautions. Folks, we are starting to come out of this pandemic. Let's come out of it all the way and take the precautions necessary so there are no additional outbreaks."

In the wake of last week's tragedy at the Waukesha, Wisconsin, Christmas Parade -- where a man drove through the crowd, killing six and injuring more than 60 -- the Los Angeles Police Department last week made no official comment when asked about  beefed-up security.

But Chief Brian Hale of the L.A. Department of Transportation said the LADOT will deploy over 100 traffic officers and supervisors to support street closures in the parade area.

The Hollywood Christmas Parade was first held in 1928, when it was called the "Santa Claus Lane Parade." Comedian Joe E. Brown was the first grand marshal in 1932 -- a role later filled by luminaries such as Bob Hope, Gene Autry and Jimmy Stewart, among others.

For those who can't attend in-person Sunday, the festivities will be broadcast as a two-hour special on The CW Network on Friday, Dec. 17 at 8 p.m