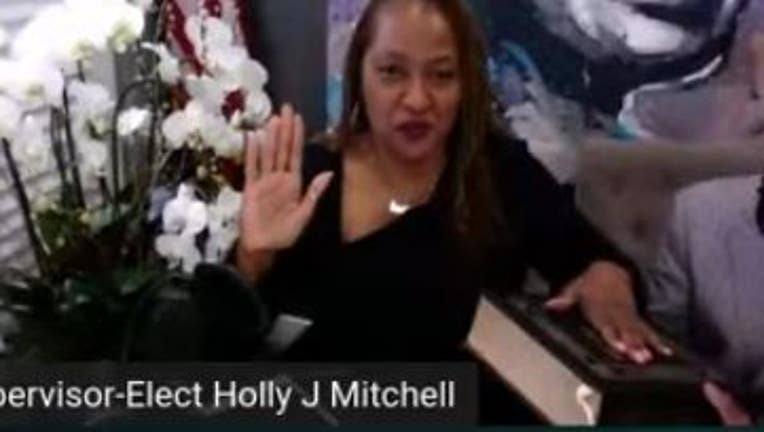 LOS ANGELES - Holly Mitchell was sworn-in to the Los Angeles County Board of Supervisors on Sunday, giving the five-member board all female members for the first time.

"I look forward to bringing my commitment to equity and justice to this historic, all-women led Los Angeles County Board of Supervisors and continuing to fight for all residents to have the resources they need to thrive," Mitchell said after defeating Los Angeles City Councilman Herb Wesson, 60.6%-39.4%, in the Nov. 3 election.

Mitchell succeeds Mark Ridley-Thomas in representing the Second District, which runs from Wilshire Center and the Miracle Mile south to Carson,west to Mar Vista and east to Lynwood. Ridley-Thomas had held the seat since 2008 and was barred from running for re-election because of term limits.

Ridley-Thomas was elected Nov. 3 to the District 10 seat on the Los Angeles City Council, succeeding Wesson, who was also barred from running for re-election because of term limits.

Mitchell ran a campaign she described as based on "creating a more equitable, inclusive, and prosperous L.A. County" and touted her accomplishments in 10 years in the state Legislature, which included passage of a package of criminal justice reform bills, and other legislation providing for transitional housing placement for foster youth to help prevent youth homelessness and extended access to mental health care services.

Mitchell was an assemblywoman from 2010-13 and state senator from 2013-2020, including being chair of the Senate Budget and Fiscal Review Committee.

During her campaign, Mitchell pledged to:

-- "Prioritize solutions that remove barriers and expand access to mental health care" beginning with stopping "the underfunding of mental health services across Los Angeles County";
-- "Continue to advocate for affordable, quality, and preventative health care solutions that address the unique health care needs of district residents"; and
-- "Promote an inclusive approach to environmental justice in LA County, one that conserves our vast and diverse ecosystem while addressing the root causes for higher rates of pollution in our vulnerable communities."

Mitchell presented a multi-point plan intended to reduce homelessness including:

-- Providing incentives to homeowners to build accessory dwelling units to rent to low- and very-low-income tenants, such as reducing property taxes through subsidies or reducing or eliminating construction fees;
-- Motivate landlords to rent to voucher holders, very low-income and formerly homeless individuals and families through fee reductions;
-- Implement a "serious anti-speculation plan" by using private/public partnerships to develop land trusts, entities that take ownership of, or authority over, a piece of property at the behest of the property owner.

Under the model, a property would be purchased (at market rate)from a prospective seller, then transferred into the trust, which would determine a more reasonable price for re-sale within the community.

-- Stop the closures of "board and care" homes by re-tooling their reimbursement system;
-- Create immediate housing stabilization loans through California's newly developed Public Bank for people at risk of becoming homeless;
-- Develop public/private partnerships with the building trades, non-profit developers and government to create a Habitat for Humanity model where formerly homeless residents are trained invaluable skills while receiving support with staying housed;
-- Raise the affordable unit requirements for new developments to at least 20%; and
-- Increasing spending on community-based mental health services including expanding residential facilities with treatment options for children and adults.

The Los Angeles County Board of Supervisors has had a female majority since 2016 when Janice Hahn and Kathryn Barger were elected to replace men barred from running for re-election because of term limits.