On Veterans Day, we honor those who served.

LOS ANGELES COUNTY, Calif. - The San Fernando Valley Veterans Day Parade will resume Friday after being canceled the past two years because of the coronavirus pandemic, with organizers expecting approximately 2,000 veterans from World War II to the wars in Afghanistan and Iraq to participate.

The time corresponds with the date in 1918 of the armistice that ended World War I.

The grand marshal will be Charles Green, who enlisted in the U.S. Marine Corps immediately after graduating from Edison Technical High School in Rochester, New York in 1976, serving through 1979. He joined the U.S. Army in 1980, retiring in 2002 as a master sergeant. He served as a squad leader and platoon sergeant and was deployed to Bosnia, Germany and South Korea. 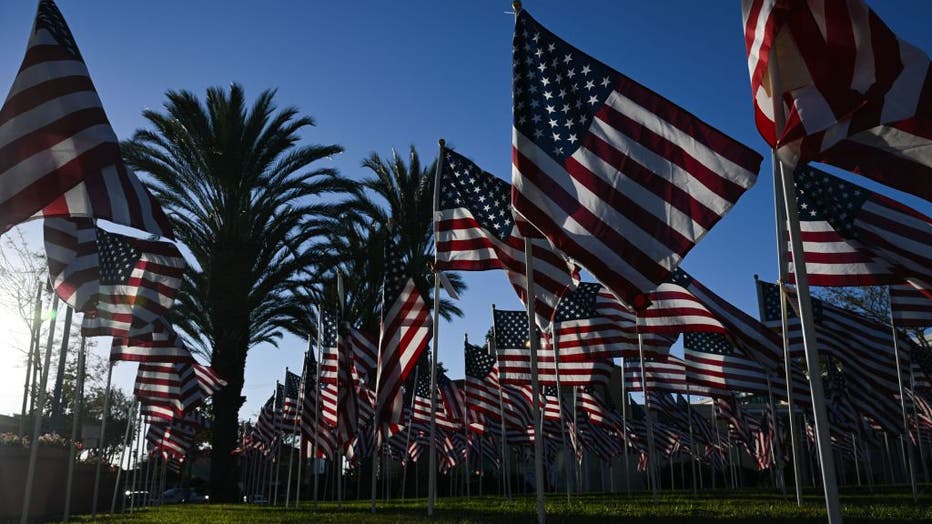 US flags are displayed in a Field of Honor ahead of the Veterans Day holiday outside of City Hall in Lawndale, California. (Photo by Patrick T. FALLON / AFP) (Photo by PATRICK T. FALLON/AFP via Getty Images) (Getty Images)

He was hired by the Department of Veterans Affairs in 2006 to conduct Transition Assistance Program briefings for service members leaving active duty. He is the site manager for the Sepulveda Ambulatory Care Center at the Sepulveda VA Medical Center in North Hills.

The 63rd annual Veterans Day event at Forest Lawn-Hollywood Hills will include a flyover, patriotic music and a wreath laying. The keynote address will be delivered by California State Guard Maj. Brenda Threatt, the director of veterans services at El Camino College in Torrance. Los Angeles City Controller Ron Galperin is also set to speak.

The event will begin at 11 a.m. and will be streamed online.

Approximately 500 pre-selected active-duty service members and their families will be at Dodger Stadium for an event including the opportunity to take batting practice on the field and a question-and-answer session with catcher Austin Barnes and first baseman Max Muncy.

The event is closed to the general public.

Veterans Day has its roots in a proclamation issued by President Woodrow Wilson in November 1919, a year after World War I ended, designating Nov. 11 as Armistice Day. States soon started declaring Nov. 11 a legal holiday. Congress made it a federal holiday in 1938, dedicated to the cause of world peace.

In 1954, following World War II and the Korean War, Congress, at the urging of veterans service organizations, passed a law renaming Armistice Day Veterans Day. From 1971-77, Veterans Day was held in late October. A 1975 law returned it to Nov. 11, beginning in 1978.

In his Veterans Day proclamation, President Joe Biden declared, "Today, we honor generations of patriots who have earned the title of American veteran -- a badge of courage that unites the finest group of former service members the world has ever known.

"With their selfless sacrifice, our armed forces have forged and defended the very idea of America -- a promise of freedom and equality, democracy and justice, possibility and hope. We owe them an incredible debt that can never be fully repaid."