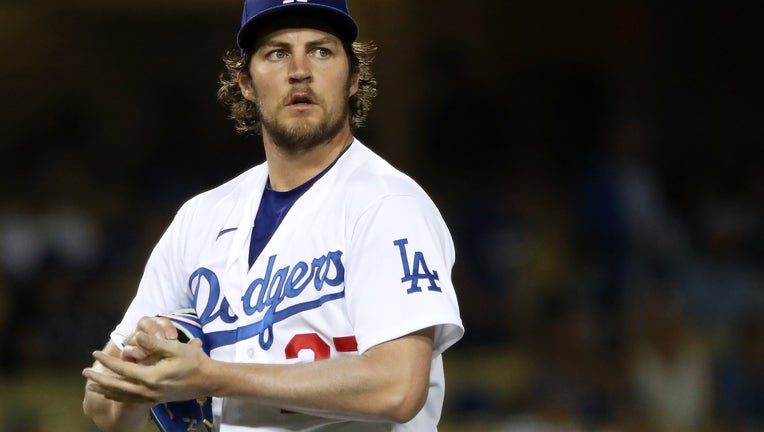 Trevor Bauer #27 of the Los Angeles Dodgers looks on after giving up a hit to Joey Gallo #13 of the Texas Rangers during the fifth inning at Dodger Stadium on June 12, 2021 in Los Angeles, California. (Photo by Katelyn Mulcahy/Getty Images)

LOS ANGELES - A hearing is scheduled Monday in a downtown Los Angeles courtroom on a woman's request to extend a temporary restraining order against Los Angeles Dodgers pitcher Trevor Bauer over assault allegations.

Los Angeles Superior Court Judge Dianna Gould-Saltman rescheduled the hearing July 23 after Bauer's attorney in the case, Shawn Holley, said she had not seen the medical records nor the information on witnesses that opposing lawyers plan to call.

Holley said that because a criminal case may be brought against Bauer, he will not answer any specific questions about the allegations during the restraining order hearing.

However, the judge said each question posed to Bauer will be analyzed to determine whether it affects his Fifth Amendment rights and he will have to answer those that do not.

In late June, Bauer's accuser filed court papers seeking a restraining order, claiming he physically assaulted her during a pair of sexual encounters. She alleges Bauer repeatedly choked her to unconsciousness and punched her in the face.

In her court papers, the accuser claimed Bauer choked her lightly at first during an April 21 encounter, then put his fingers down her throat, and wrapped her hair around her neck and choked her to unconsciousness.

She said she was examined at two hospitals and eventually took part in a recorded telephone conversation with Bauer as part of the Pasadena police investigation.

Bauer's agent, Jon Fetterolf, issued a statement in June blasting the woman's allegations as baseless and defamatory, saying the pitcher "had a brief and wholly consensual sexual relationship initiated by (the accuser) beginning in April 2021."

"We have messages that show (the accuser) repeatedly asking for 'rough' sexual encounters involving requests to be `choked out' and slapped in the face," Fetterolf said. "In both of their encounters, (the accuser) drove from San Diego to Mr. Bauer's residence in Pasadena, where she went on to dictate what she wanted from him sexually and he did what was asked.

"Following each of her only two meetings with Mr. Bauer, (the accuser) spent the night and left without incident, continuing to message Mr. Bauer with friendly and flirtatious banter. In the days following their second and final encounter, (the accuser) shared photos of herself and indicated she had sought medical care for a concussion. Mr. Bauer responded with concern and confusion, and (the accuser) was neither angry nor accusatory.

"Mr. Bauer and (the accuser) have not corresponded in over a month and have not seen each other in over six weeks. Her basis for filing a protection order is nonexistent, fraudulent and deliberately omits key facts, information and her own relevant communications. Any allegations that the pair's encounters were not 100% consensual are baseless, defamatory and will be refuted to the fullest extent of the law."

Lt. Bill Grisafe of the Pasadena Police Department confirmed the agency is investigating allegations against Bauer, but could not provide any additional details.

Bauer signed a three-year contract with the Dodgers on Feb. 11 worth $102 million, including $40 million this season, reported to be the highest single-season salary in baseball history.

He has been placed on administrative leave through at least Aug. 20 by Major League Baseball and the Players Association.

Meanwhile, the Washington Post reported Saturday that Bauer was the subject of a temporary order of protection last year for allegedly physically abusing an Ohio woman and making a death threat toward her.

The newspaper said it obtained sealed court records and other documentation in which the woman says Bauer punched and choked her without her consent while they were having sex. He also allegedly sent her a text message saying he doesn't "feel like spending time in jail for killing someone."

The Ohio order was part of an "ex parte," proceeding, meaning it was issued without a hearing from the other side.

It was not clear whether the alleged incident was investigated by police.

Bauer tweeted that "while I have allowed my representatives to speak on my behalf over the last six weeks, I can no longer be silent. I will speak very candidly about the current petition when appropriate, but need to address the allegations made today in The Washington Post.

"The Washington Post has spent the last six weeks digging into my life and attempting to contact hundreds of female friends and acquaintances with whom they suspect I had some form of romantic relations -- some of whom I haven't had contact with in over a decade -- in an effort to create a false narrative.

"Several of these individuals have sent me screenshots of their requests, many shared that they had only positive things to say, and others felt very uncomfortable or harassed by the nature of their requests.

"Despite my representatives providing a wealth of contradictory evidence, documents, statements, and background information showing the pattern of disturbing behavior by this woman and her attorneys, The Washington Post opted to ignore much of this information and to run a salacious story disseminating defamatory statements, false information, and baseless allegations from a woman who has not only harassed and physically assaulted me but who also attempted to extort me for millions of dollars last year in exchange for her not coming forward with these false claims," Bauer wrote.

Fetterolf and Bauer's co-agent, Rachel Luba, released a statement saying Bauer and the woman were in a consensual relationship from 2016 to 2019, and that she had filed a "bogus protection petition" while "demanding $3.4 million for her to `remain silent."'

The agents also told The Post the physical abuse allegations were "categorically false" and questioned the validity of photographs reviewed by the newspaper showing bruises on her face and blood in her eyes, as well as the alleged threatening messages.

"You may not like this, and as a female it was a tough reality I had to accept, but this is not uncommon when it comes to celebrities -- this is yet another example of how people abuse the temporary DVRO process in hopes of gaining publicity/money," Luba tweeted Saturday.

The Dodgers declined to comment on the latest accusations.