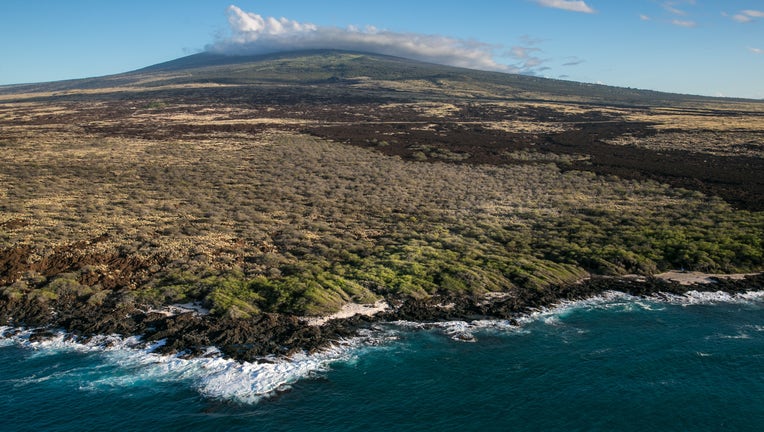 A deserted beach at the edge on an old Mauna Loa lava flow is viewed on December 16, 2016, in this aerial photo taken along the Kona Kohala Coast, Hawaii. (Photo by George Rose/Getty Images)

A magnitude 5.0 earthquake was the strongest of a series of temblors that struck Friday on Hawaii's Mauna Loa, the largest active volcano on the planet that scientists say is in a "state of heightened unrest."

Smaller aftershocks followed, according to the U.S. Geological Survey.

The series started with a 4.6 magnitude quake seconds before the larger one, which the USGS previously reported as having magnitude of 5.1.

The first one was slightly offshore and south of the town of Pahala, followed by the larger quake just south of Pahala beneath a highway, the Hawaiian Volcano Observatory said in a statement.

Hawaii County Mayor Mitch Roth said there were no immediate reports of major damage or injuries. He said later there was some minor damage in Pahala, including tiles that fell in a county building.

"Shaking from the larger earthquakes may have been strong enough to do minor local damage, especially to older buildings," the observatory's statement said. "The two earthquakes occurred within 24 seconds of each other creating shaking of longer duration and possibly greater intensity than either of the earthquakes would have created on their own."

The aftershocks could continue for several days to possibly weeks and may be large enough to be felt, the observatory said.

Mizuno Superette, the only grocery store in rural Pahala, closed for about an hour and a half after the shaking left broken jars on the floor and knocked out electricity, said cashier Laurie Tackett.

"The ground was just shaking," she said by phone while ringing up purchases after the small store reopened. "It was a little scary."

Mauna Loa is not erupting and there are no signs of an imminent eruption at this time.

Scientists at the observatory were monitoring Mauna Loa closely for changes.

Hundreds of responses on the USGS earthquakes website reported feeling varying degrees of shaking across the vast island. Those near Pahala reported strong shaking, while others further away felt weaker tremors.

The Pacific Tsunami Warning Center said there was no tsunami threat to Hawaii.