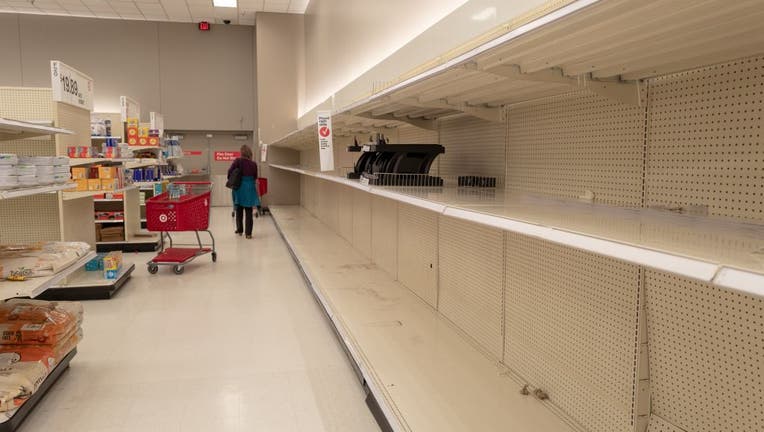 Empty shelves are visible at a Target retail store in Contra Costa County, San Ramon, California, as residents purchase all available stock of toilet paper, paper towels, canned goods, hand sanitizer and other essential items during an outbreak of th

Empty shelves and out-of-stock items at local grocery stores are conjuring up memories of Spring 2020, but experts say the pandemic isn’t really to blame this time.

Sure, there are still supply chain backups and a shortage of labor that have persisted throughout the economic downturn brought about by the pandemic. But the primary culprit for the recent grocery shortage is mother nature.

The recent winter storms that blanketed parts of the country with snow and ice made roads impassable. Doug Baker, vice president of industry relations at the Food Industry Association, told FOX Weather the storm halted trucking on Interstate 95 through Virginia, which is a "major artery" for the grocery supply chain.

"That’s a major artery that brings a lot of food from the South to the North and it’s a major connecter for several states on the east coast," Baker said.

"Because there’s so many trucks that are coming into those yards every single day, a lot of times it’s not the same day that they actually get unloaded," Baker explained. "It could be a day, it could be two days, it could be three days later."

Perishable and frozen food items are prioritized. But shelf-stable items that can afford to sit on the truck longer tend to stay there a few more days, Baker said.

This weekend, another winter storm lies ahead for much of the United States. Heavy snow, ice and strong winds will snarl travel as it tracks from the Midwest to the South and then up the east coast, FOX Weather reported.

Baker said that could prevent a new challenge for grocers, especially since shoppers tend to load up ahead of weather events like this.

"You’ve got to look at consumer shopping behavior, first and foremost," Baker said. "They hear about an event like this, they hit the store, they want to load up, they don’t know what’s going to happen to them. And so, that inventory is not always there right now and that’s just going to make things a little bit more challenging over time."