NEWPORT BEACH, Calif. - Whale watchers off the coast of Southern California had an unforgettable encounter with gray whales — one the excursion company called its "most epic" of all time.

On Monday, passengers on a Newport Coastal Adventure tour boat near Newport Beach were cruising along the water at sunset when a pair of giant gray whales stopped to check out the small vessel for more than 45 minutes.

Video shared by the company showed the gray whales calmly rolling, bobbing and even raising their tails out of the water next to the boat, much to the delight of the tour group. The whale watchers are also heard excitedly reacting as the curious creatures blew from their blowholes.

"The encounter lasted for over 45 minutes as the whales were rolling, spy hopping, and became extremely interested in our boat and passengers onboard," Jessica Roame, Newport Coastal Adventure’s education manager, said in an email, who added that this behavior is referred to as "mugging."

Roame emphasized the fast raft boat’s engines were off and the boat holding 15 people was drifting during the encounter.

"It’s important to stress that during this time in the year, boaters should be cautious when boating in the ocean, and keep a sharp eye out for migrating gray whales because they are on the move all along the coast right now," she said. "Boaters should always be respectful, and move slow when a whale is spotted, and keep your distance." 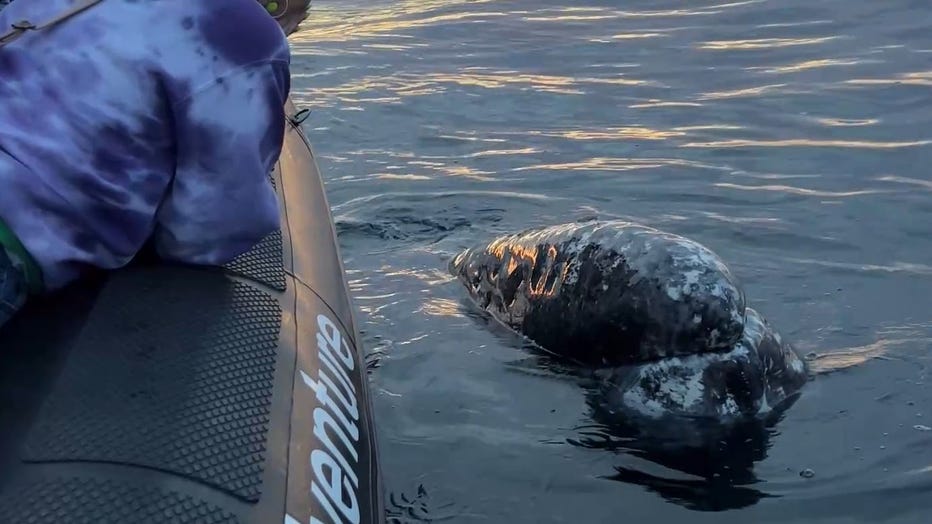 The two gray whales spent over 45 minutes near the boat off of Newport Beach, California. Credit: Newport Coastal Adventure

Gray whales can reach lengths of up to 49 feet long and weigh over 60,000 pounds when they’re fully grown. The giant marine mammals are found mainly in the coastal waters of the North Pacific Ocean, according to the National Oceanic and Atmospheric Administration. Each year, they make an annual migration south along the coast of North America to spend the winter off the coast of Baja California, Mexico.

Calves are born during this period in the bays of Mexico between early January to mid-February, NOAA said. From mid-February to May, gray whales can be seen migrating northward along the U.S. West Coast.

Most of the gray whales Newport Coastal Adventure has encountered in March are part of this northbound pod en route back to Alaska, Roame said.

"Gray whales are known as the ‘Friendly Whales’ because of their curious and friendly behavior while in the breeding lagoons in Mexico, but occasionally they will get friendly with our whale watching boats during their migration home," Roame said.

She called the experience "a very special moment for passengers and crew" as Thursday’s close-up encounter is "very rare" along Southern California’s coastline. 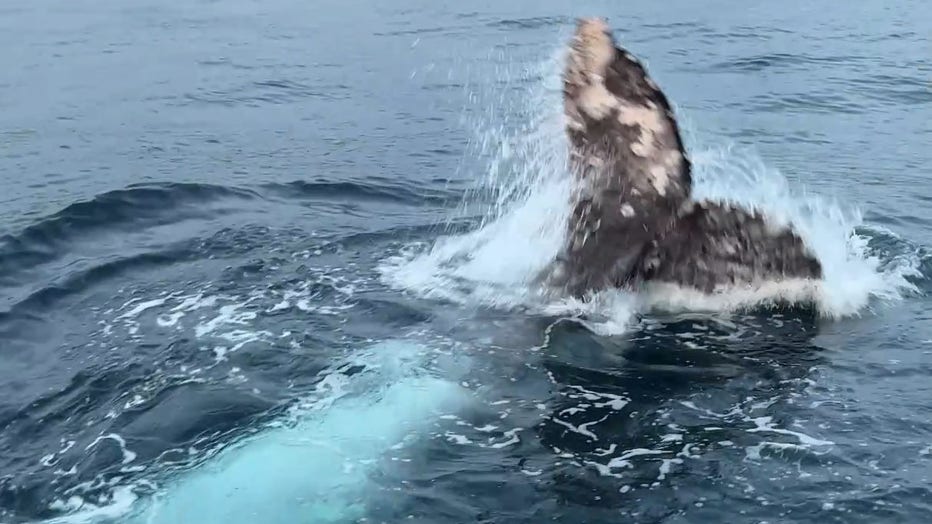 A gray whale slapped its tail on the water in front of the tour group, as seen in a video recorded on March 21, 2022. Credit: Newport Coastal Adventure

Meanwhile, some marine experts have reported a small population of gray whales returning to waters off of Washington state earlier than usual to feed amid recent food stress. NOAA in 2019 also designated a gray whale "Unusual Mortality Event," which is defined as "a stranding that is unexpected [and] involves a significant die-off of any marine mammal population," amid a plummeting population in recent years.

NOAA said in an early 2021 report that the population of gray whales that migrate along the West Coast had declined about 24% since 2016. In 2019 alone, 122 dead gray whales had washed up on the U.S. coast and more than 200 along the whole North American coast, according to NOAA stats.

Many of these stranded gray whales appeared thin and malnourished, according to NOAA. It noted how an investigation amid the Unusual Mortality Event was studying ecosystem changes that may be impacting the gray whale’s habitat and food supply — as well as the impacts from "harmful algal blooms, infectious disease, natural predation and human interactions."

Whale Caller (2016): In a seaside town, a man with a curious, lifelong kinship to whales seems to be more in love with one marine mammal than with the woman who loves him. Featuring Sello Maake Ka-Ncube, Amrain Ismail Essop

Luna: Spirit of the Whale (2006): When a government representative (Priestly) announces that he intends to reunite an orphaned orca with his pod by transporting him hundreds of miles over dry land, the Mowachaht-Muchalaht First Nations Band, which believes that the spirit of their late chief resides in the majestic ocean mammal, does everything within their power to thwart the controversial plan. As the community grows increasingly divided over how to handle the situation, a young aboriginal boy wrestles with his own identity and new Band chief Mike Maquinna (Beach) prepares for the trial by fire that could shape his entire future. Featuring Adam Beach, Graham Greene and Jason Priestley