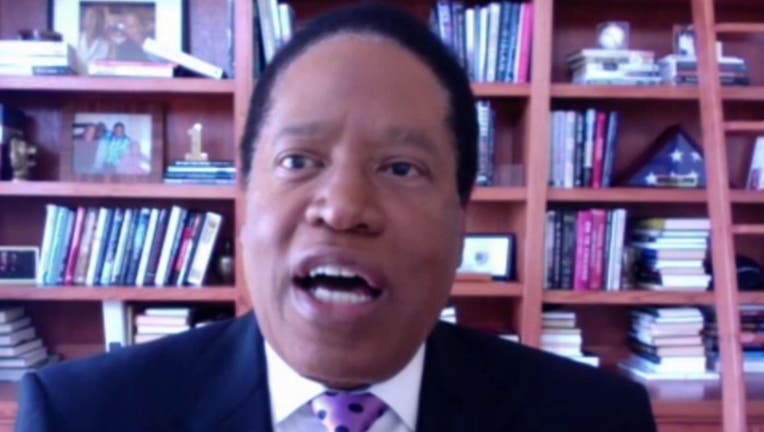 LOS ANGELES (AP) - Larry Elder, a talk radio host and Republican candidate in the California recall election that could remove Democratic Gov. Gavin Newsom from office, reported income of more than $100,000 in the last year from business interests that included media and film companies and a string of political speeches, according to documents released Tuesday.

Elder, 69, who also is known for his appearances on Fox News, has eclipsed his GOP rivals in fundraising since entering the recall contest on July 12. Elder’s swift rise to prominence in the campaign has drawn the attention of Newsom, who has been centering his attacks on him, calling Elder out of step with California families and progressive values.

Last week, Newsom and Elder clashed over mask and vaccine mandates supported by the governor, which Elder said "will be suspended right away" if he takes office.

The election is set for Sept. 14 and there are 46 candidates on the ballot who hope to replace Newsom, including 24 Republicans. Mail-in ballots already are arriving at homes. Republican former U.S. Rep. Doug Ose dropped out Tuesday, after suffering a heart attack last weekend.

Under state law, candidates are required to disclose financial interests to avoid potential conflicts of interest if they assume office. The state does not require specific figures for income in the disclosures, only general ranges, so its impossible to tell how much Elder earned from each source.

Candidates must include investments, interests in property, business positions, loans and gifts received in the prior year. However, the document provides only a partial snapshot of personal wealth — for example, primary residences do not have to be listed.

After an initial filing with the state did not list sources of income, the California Democratic Party filed a complaint with state regulators arguing that Elder failed to properly disclose his income in his company, Laurence A. Elder and Associates. The campaign responded that an "innocent mistake" had occurred, leading to the release of the four-page revised document for income from July 2020 through July 2021.

Only income above $10,000 must be listed Elder’s filing showed 11 such sources. Among them: Salem Media Group, which carries his nationally syndicated radio show; a film company in which he is involved; and advertising from a supplement company, Promedev Relief Factor.

Other reported payments came from Epoch Times, which was launched in 2000 by members of the Falun Gong spiritual movement that is banned in China, and speeches to Republican organizations, the conservative group Turning Point USA, Calvary Chapel in Chino Hills and Heartbeat at 22, a nonprofit that advocates against abortions.

Elder reported the overall value of his company of between $100,000 and $1 million. Elder also reported co-owning a home in Los Angeles with his sister.

The Los Angeles Times reported in 2019 that Elder was selling another home, in Hollywood Hills, for $5.2 million.

Last month, the secretary of state initially blocked Elder from the ballot, saying he failed to meet a requirement that candidates for California governor publicly release tax returns for the five most recent years. Elder challenged the decision in state Superior Court in Sacramento, and a judge determined the rule didn’t apply to recall elections. Since the law was voided, his returns were never made public.

According to tax returns disclosed in May, Newsom and his wife made $1.7 million in 2019 during his first year as governor, about a half-million dollars more than the year before. On the Republican side, the wealthiest candidate is businessman John Cox, a multimillionaire real estate investor who largely is funding his own campaign. Cox lost to Newsom in a landslide in 2018.