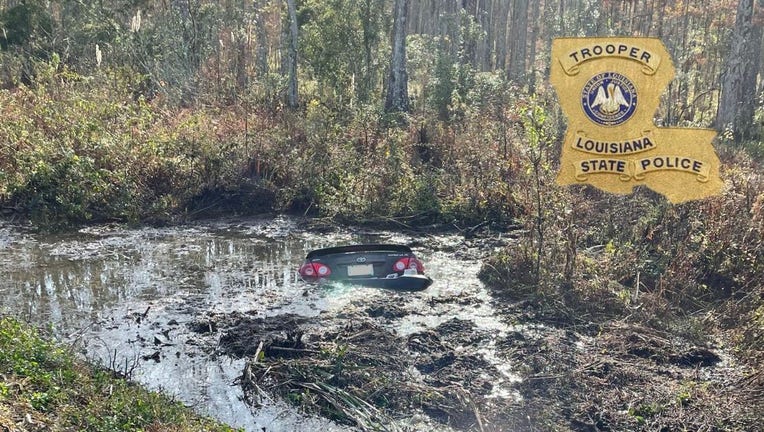 The 2007 Toyota Corolla is pictured submerged in the water after veering off the roadway and entering into a canal on Dec. 7, 2022, in Assumption Parish, Louisiana. (Credit: Louisiana State Police)

ASSUMPTION PARISH, La. - Two good Samaritans jumped into the water and rescued a family from drowning in Louisiana after their vehicle crashed into a canal and became submerged.

The rescue was reported on Wednesday morning in Assumption Parish, located in the south-central portion of Louisiana. The family of four, which included two small children, had been driving along LA Highway 182 when their 2007 Toyota Corolla veered off the roadway and went into a nearby canal, sinking into the murky water, according to the Louisiana State Police.

"Due to the thick mud and marsh, the occupants of the Toyota were unable to open the doors and exit the vehicle," the police wrote in a statement about the incident.

Two people witnessed the crash and separately stopped to help, later identified by police as Jeff Lapeyrouse, from Bourg, Louisiana, and Chase Dupre, from the town of Chauvin, authorities said.

Lapeyrouse and Dupre both jumped into the water and were able to open a door on the Toyota, working together to safely pull all four of the family members from the car, according to the Louisiana State Police.

Shocking video shows a good Samaritan coming to the rescue of an elderly man being attacked and robbed in Hollywood. Surveillance video shows a person sucker punch an elderly man getting tackled by a business owner. Tim Ratcliff ran down the wannabe thief after he took the victim's phone and wallet. "I took him down and just waited there until the police arrived," Ratcliff said. Ratcliff is seen tackling the thief into the intersection of La Brea and Hollywood. Ratcliff's girlfriend and another witness helped until police arrived. In the video, Ratcliff is seen holding down the suspect for nearly nine minutes. "I was not gonna lie, the adrenaline was a lot at that point, and afterwards it was exhausting it felt like I had worked out the next day for quite a bit." The incident happened the same day the Los Angeles Police Department announced they are adding 200 officers to the Hollywood division to address the spike in crime. "Even one of the officers and I talked about it… they're tired of it… a lot of people like myself are tired of this type of thing happening... we're seeing more and more people just not putting up with it and taking it into their own hands… which I'm glad for… and I'd happily do it again," he said.

Lapeyrouse, in his own statement on Facebook, said he was "far from a hero, just another guy that did what many others would have done."

"I just thank god that WE were able to get the family out safe," Lapeyrouse wrote.

"(Dupre) was the man that got the door open and then we were able to get the family out safely," he continued. "I want to make sure he gets the recognition, because without him there, I don’t know if things would have turned out the same."

The family only received minor injuries in the crash, according to police.

For its part, the Louisiana State Police said it was "thankful for both of these men who selflessly entered a dangerous situation to help save the lives of many."