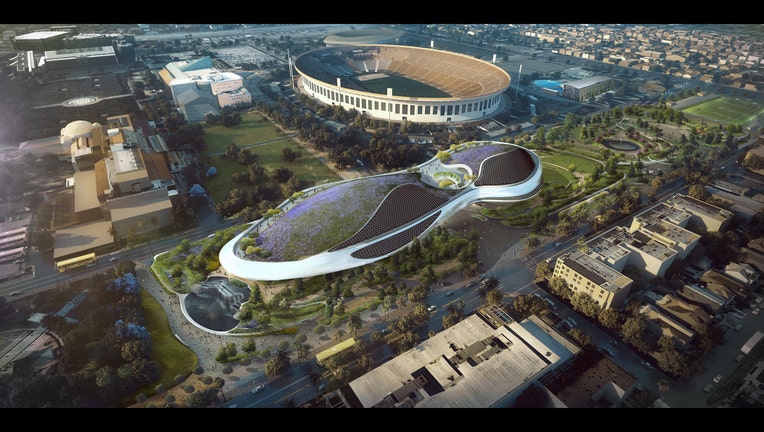 LOS ANGELES (FOX 11 / CNS) - George Lucas and his wife, Mellody Hobson, joined local dignitaries Wednesday to formally break ground on the filmmaker's $1 billion art museum in Exposition Park, vowing that the building itself would be a work of art.

"It will be beautiful. It will be 11 acres of new parkland here,'' Hobson said. "Everyone always wonders why we are doing so much to make this building stand out. George said, 'I want an iconic building. I want a child to look at this building and say I want to see what is inside of that building.' The building itself is a piece of art that will be in this park that we're creating for this entire community and the world.''

Lucas added, "I wanted a special museum that is a work of art in itself.''

The Lucas Museum of Narrative Arts will house works by painters such as Edgar Degas, Winslow Homer and Pierre-Auguste Renoir; illustrations, comic art and photography by artists such as Norman Rockwell, Maxfield Parrish and N.C. Wyeth; as well as storyboards, props and other items from popular films. It will be a "barrier-free museum'' where "artificial divisions between
'high' art and 'popular' art are absent,'' according to the museum's website.

The museum plans to feature a five-story building with 300,000 square feet of floor area for a cafe and restaurant, theaters, office space, lecture halls, a library, classrooms, exhibition space and landscaped open space. Lucas will be donating all of the art and paying for the museum's construction in what has been billed the largest philanthropic gift to an American city in the 21st century.

"Yes, this is an art museum, but I'm trying to position it also as an anthropological museum,'' Lucas said. "... Popular art is an insight into a society and what they aspire to, what they really want, what they really are. Because it's telling the narrative of their story, their history, their belief system.''

Lucas said narrative art "does tell us who we are and where we came from.''

"I think it's important to have a museum that I used to jokingly say supports all the orphaned arts that nobody else wants to see but everybody loves,'' he said. "So that's my dream for this.''

Lucas, creator of the "Star Wars'' film franchise, producer of the "Indiana Jones'' franchise and founder of visual effects company Industrial Light & Magic, chose Los Angeles as the home of the $1 billion museum in January, after facing legal challenges in Chicago and also considering San Francisco.

The building was designed by Ma Yansong of MAD Architects, and besides the artwork will feature new digital technologies, daily film screenings and educational opportunities with hands-on and digital classrooms and a public research library for students.

After Lucas ran into opposition in Chicago, Los Angeles Mayor Eric Garcetti reached out and tried to woo him to Los Angeles. Lucas considered both the Los Angeles proposal and San Francisco, where he has strong connections after growing up in Modesto and living in the Bay Area for decades.

Lucas also ran into opposition in San Francisco in 2014 with a plan to build the museum at the Presidio before the 2016 San Francisco plan proposed Treasure Island.

"As they say, three is a charm. This has been a very long and hard journey. My joke is, who knew it would be so hard to give away a museum,'' Hobson said in June. "But it really has been something that has challenged us, and it's a bit emotional for us to be standing here and seeing this dream become a reality.''

The museum is scheduled to open in 2021.