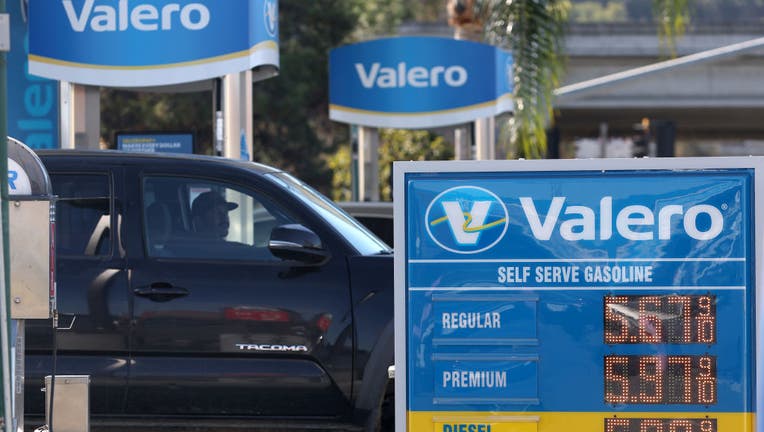 Gas prices are displayed in front of a Valero gas station in San Rafael, California (Photo by Justin Sullivan/Getty Images)

LOS ANGELES - The average price of a gallon of self-serve regular gasoline in Los Angeles County increased one-tenth of a cent Sunday to $5.528, ending a streak of 31 consecutive decreases.

The average price dropped 96.7 cents over the streak, including two-tenths of a cent Saturday, to its lowest amount since Sept. 20, according to figures from the AAA and the Oil Price Information Service. It is 10.4 cents less than one week ago and 96.3 cents lower than one month ago, but 93.9 cents more than one year ago.

The Orange County average price fell three-tenths of a cent to $5.417, two days after 29-day streak of price decreases ended. It is 8.7 cents less than one week ago and $1.019 cents lower than one month ago, but 87.5 cents more than one year ago.

"Los Angeles wholesale gasoline prices are higher than they were two weeks ago, but still are about $1.80 below their all-time record level reached in late August, indicating that there is still a lot of room for declines in pump prices," said Doug Shupe, the Automobile Club of Southern California's corporate communications manager.

"Almost every part of the metropolitan Los Angeles and San Diego areas should have at least a couple of gas stations charging less than $5 a gallon," he added.