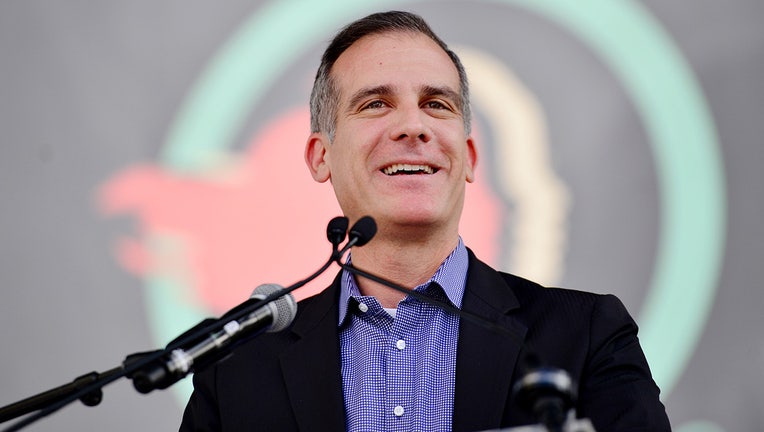 LOS ANGELES - Los Angeles Mayor Eric Garcetti said Friday that he has reached a preliminary agreement with the Trump administration on a joint plan to help combat the city's homelessness crisis.

Garcetti said he discussed plans with Secretary of Housing and Urban Development Ben Carson while in Washington, D.C., where he took part in the U.S. Conference of Mayor's annual meeting.

"The city of Los Angeles has already shown a strong commitment to our neighbors in need by pulling together and funding the largest permanent supportive housing plan in our history," Garcetti said. "Now, we have an opportunity to show our fellow Californians, and the country, how we will rise to the challenge by working across party lines to put people first and compassionately house our most vulnerable."

Garcetti said Thursday a final deal was still days or weeks away but expressed optimism that the two sides were making progress toward an agreement to provide federal resources, including land, to augment local efforts to erect more shelter space for people living on the streets.

In a statement after meeting with Garcetti, Carson said it is a "logical" move to offer people shelter while permanent housing is constructed. He said HUD provides similar shelters to people after a natural disaster.

"Today, in California, the fifth-largest economy in the world and known for having a big heart, there are women, children and men who wake up every day on the street," Carson said. "While the city and state continue to build and invest in more affordable and permanent housing, we have agreed on the need for temporary emergency housing so vulnerable individuals can go to bed with a roof over their heads."

Citing the ongoing negotiations, Garcetti would not say how much money the Trump administration might contribute. But he said the federal aid would not match the hundreds of millions of dollars spent at the local level.

Garcetti also said he could not yet publicly say where temporary shelters would be located. But he added that federal officials had visited sites in Los Angeles County, including property owned by the Department of Veterans Affairs.

"There's surplus property that they have all over, so I think they looked at everything," he said.

In his comments to the mayors' conference, Garcetti downplayed hopes of a massive federal aid package to helps cities and states fight homelessness.

"There's no cavalry coming from Washington," he said. "But we will not solve this locally without our state capitals and our nation's capital."

Garcetti faces intense pressure to find housing for the city's burgeoning homeless population. Despite his aspirations for higher office as a Democrat, he has been eager to court help from the Trump administration as the crisis has worsened.

President Trump, a Republican, threatened for months to take action without consulting the city. But he has struck a more cooperative tone in recent weeks as it became clear federal officials could do little without local cooperation, The Times reported.

The Los Angeles Homelessness Services Authority announced last week that it will receive nearly $130 million from HUD for projects to help homeless people.