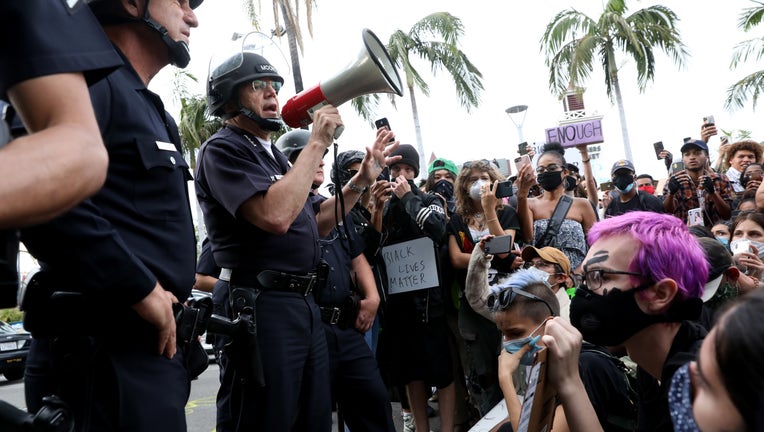 LOS ANGELES, CA -- MAY 30: Michel Moore, second from left, Chief of Police for the Los Angeles Police Department, lets protestors who are demonstrating that the area is closed at W 3rd St and S Fairfax Ave. in the Fairfax District on Saturday, May 30

LOS ANGELES - Mayor Eric Garcetti says he still has confidence in Los Angeles Police Department Chief Michel Moore, despite his comments when he equated looting to the in-custody death of George Floyd.

"I've known this man's heart for decades. He was the person brought in after the Rampart scandal to clean up that station as a captain,'' Garcetti said of the chief.

"When I heard him say what he said, I knew that he did not mean that, and I know that he corrected it right away.''

Floyd, 46, a black man, was killed May 25 when Minneapolis officers detained him and one of them pressed his knee against his neck for more than eight minutes, which asphyxiated him. His death spurred protests against police
brutality across the nation.

Many people on social media called for Moore's resignation after he made the comment Monday, but he has been not been hesitant to offer his apologies, which he gave Monday night and Tuesday morning.

"If I believed for a moment that the chief believes that in his heart, he would no longer be our chief of police. I can't say that any stronger,'' Garcetti said.

There were at least 1,000 U.S. National Guard personnel in Los Angeles Tuesday night, but Garcetti said they will not go to South Los Angeles, a region of the city with many black residents, adding that "would be a mistake'' as the area has had a history of uprisings.

However, during this crisis, there have been few violent incidents in that part of the city, Garcetti said.

LAPD officers and National Guard personnel will still use the non-lethal tactics that have been discharged against looters and at times unruly protesters, but Garcetti said he hopes that kind of enforcement will be minimal.

"I know what it's like ... on those lines, to have police officers who have had their skulls fractured, who have maintained their resolve and their restraint,'' Garcetti said. "So, those tactics will sometimes be out there, but it is my direction to minimize those.''

Garcetti gave his update on the protests against police brutality with a dissonant backdrop of sirens and helicopters chopping through the air, as he again called for peace throughout the city while hundreds of people showed up at Getty House, the residence of the mayor of Los Angeles.

Garcetti did not make any statements regarding the proposed more-than-$1.86 billion LAPD budget, which is going through the process of committee amendments as well as public comment. Some organizations, such as People's
Budget LA, want major portions of the police budget reallocated to other departments.

Garcetti said he has spoken with local elected officials about the police budget, and those discussions will continue.