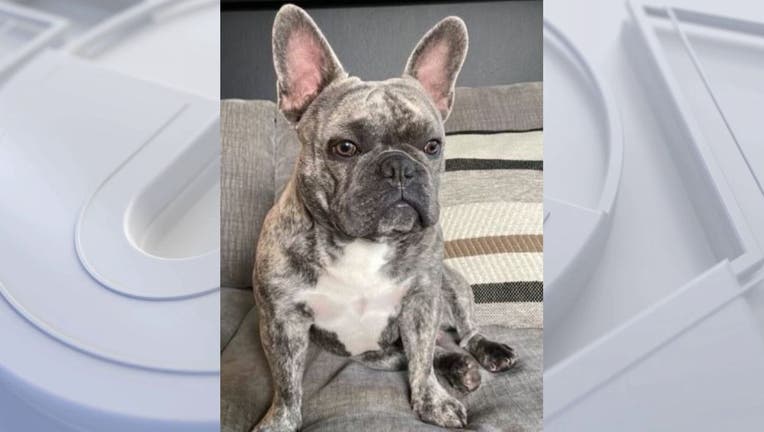 LOS ANGELES - Police are asking for the public's help in finding a French bulldog that was taken during an armed robbery in the Pico-Robertson area of Los Angeles.

The Los Angeles Police Department responded to a call in the 8000 block of Cashio Street around 9:15 p.m. Wednesday. According to LAPD, a woman felt a tug on her dog's leash from behind and noticed one of the suspects – in this case, Suspect 1 – trying to take the dog away from her.

During the struggle between the woman and Suspect 1, a second suspect (Suspect 2) shoved the woman to the ground, causing her to lose grip on the dog's leash. A bystander tried to help, but Suspect 2 pointed a gun at the good Samaritan.

The two suspects left with the French bulldog in a black or dark-colored van.  Officials did not give specific descriptions of the suspects other than the fact that they are possibly in their 30s or 40s.

The missing French bulldog is described as a reverse brindle – blue/gray in color – with a white chest. Anyone with information on the missing dog or the suspects is asked to call Los Angeles Police Department, West Los Angeles Division Robbery at 310-444-1528. You can remain anonymous by calling the L.A. Regional Crime Stoppers at 1-800-222-TIPS (800-222-8477) or go directly to lacrimestoppers.org.