Shocking video of gunshots being fired at an underground party in Ontario over the weekend and it was all caught on FOX 11’s undercover cameras.

ONTARIO, Calif. - FOX 11’s undercover cameras were rolling as several volleys of gunfire broke out at a large underground party in violation of health orders in Ontario Saturday night.

FOX 11 was shooting video as part of an investigative series tracking the underground party scene in the greater Los Angeles area as COVID-19 rates continue to skyrocket.

Health officials caution that young people are primarily behind the surge, often as a result of private gatherings and parties.

FOX 11 began Saturday evening at a house party in Pomona that had been promoted on social media. Large crowds could be seen gathering outside the house.

A Pomona police unit passed by but did not stop.

Videos posted to social media show the party inside the house, which was a health officials worst nightmare.

Hundreds of people were crammed indoors, dancing and drinking, with no social distancing, and almost nobody wearing masks.

By the time the party came to a close after 1 a.m., the crowd began to gather outside, where several people were seen walking with tanks of nitrous, and others were seen taking hits of nos from balloons.

Talk began to spread of an afterparty in the city of Ontario, also promoted on social media.

FOX 11 cameras were rolling there as partygoers began to arrive at the location in droves.

There appeared to be a security guard frisking people as they came in, as well as somebody collecting cash cover.

Videos posted to social media show hundreds of people crammed into an outdoor space at the party, as a DJ plays music.

FOX 11 cameras then witnessed several volleys of gunshot ring out, with one man appearing to shoot a handgun into the air. 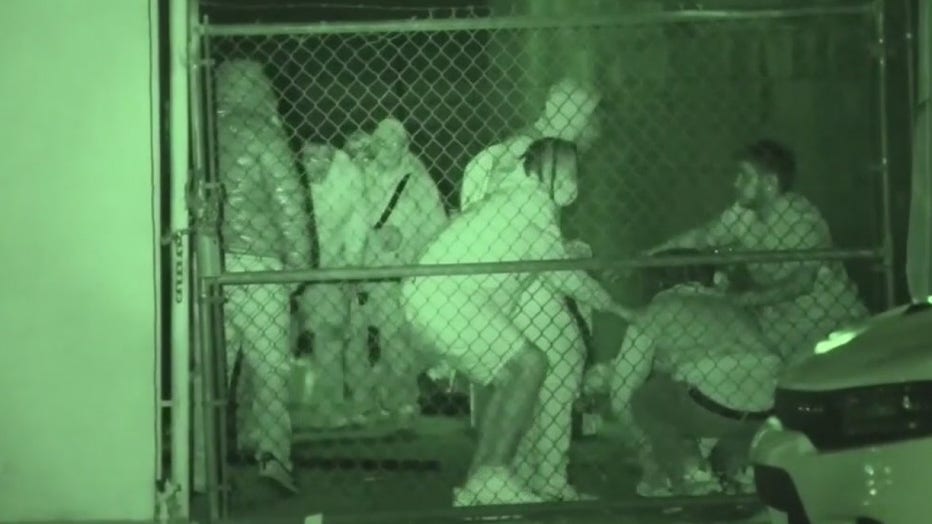 The crowd scattered in all directions in a panic, with some trying to scale a chain-link fence with barbed wire at the top of it in order to escape.

As the crowd fled the party, we witnessed two cars crash into each other, and one woman laid motionless on the ground.

FOX 11 initially believed she was a gunshot victim, but responding Ontario Police officers checked on her, and she appeared to simply be passed out.

Paramedics loaded her into a vehicle and took her away from the scene. It does not appear that anybody was struck by gunfire during the shooting.

The party promoter later posted an angry message on social media saying that he typically hires armed security, and the one time he doesn’t, people decide to act stupid and shoot into the air.

He said, as a result, he won’t host another party again until next month.

Ontario PD confirmed to FOX 11 they are actively investigating the shooting and trying to identify suspects.

Pomona PD told FOX 11 their small department was busy dealing with an armed robbery and their resources were at more important calls for service when asked why the initial house party wasn’t broken up.