Crews were working to knock down that flames that erupted at a commercial building in downtown Los Angeles on the morning of Oct. 13.

LOS ANGELES -  A major emergency fire in a textile business in a commercial building in downtown Los Angeles this morning spread to an adjacent building, and more than 130 firefighters extinguished the flames and prevented them from spreading further.

The fire was reported about 4:45 a.m. in the 800 block of South Crocker Street and was extinguished in about three and a half hours, said Margaret Stewart of the Los Angeles Fire Department. 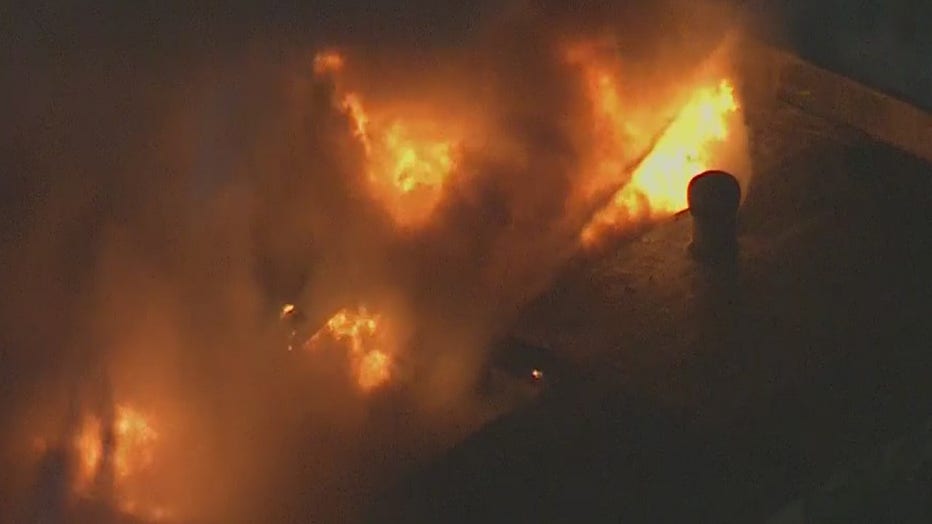 One firefighter was taken to a hospital for treatment of "non-life threatening heat-related illness," Stewart said in a statement.

"LAFD Arson Section is actively investigating the cause of the fire based on protocols due to the size of the incident," Stewart said.

Arriving firefighters found a fire outside the building that appeared to spread into the structure, Stewart said.

Crews made their way into the building and found fire burning inside, fueled by stacks of rolled fabric, and the incident commander requested additional resources, Stewart said.

Firefighters appeared to have gained the upper hand on the flames within about 40 minutes, but the flames spread to an adjacent building. Each building is single story, and about 25-feet-by-75 feet, said LAFD Capt. Erik Scott.

The buildings house a number of businesses, including textile companies and flower marts. One business was RB Textiles, Inc., a fabric wholesaler.

"Due to the heavy amount of fire load inside of these multiple occupancies, with rolls of fabric and flower stores, we've been forced into a defensive operation, meaning that we pulled our firefighters from the inside out, to ensure their safety," Scott told reporters at the scene after daybreak.

"And now, we're just over two hours into the firefight, and we do not have full extinguishment,'' Scott said. ``As you all can see, we made excellent progress. We do not expect the flames to spread to any other adjacent buildings."

Fire crews were expected to remain on scene for hours conducting "an extensive overhaul operation," the LAPD reported.

Get your top stories delivered daily! Sign up for FOX 11’s Fast 5 newsletter. And, get breaking newsalerts in the FOX 11 News app. Download for iOS or Android.