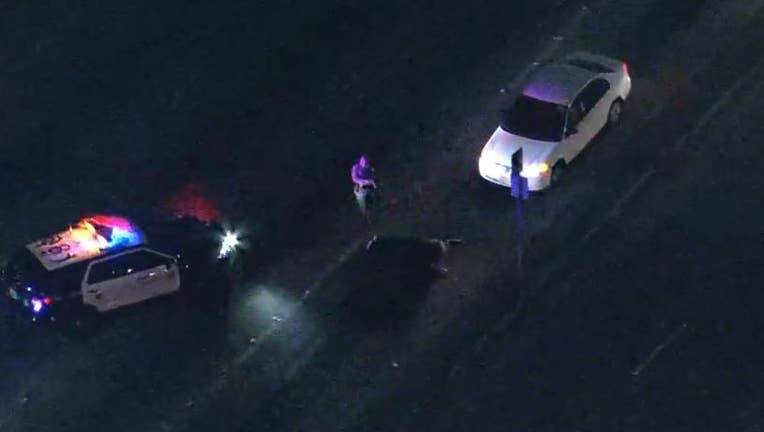 WHITTIER, Calif. - Five people suspected in a gun-related assault were detained Sunday during a 90-plus-minute pursuit of an SUV that crisscrossed the San Gabriel Valley and parts of East Los Angeles, Boyle Heights and downtown Los Angeles, according to the L.A. County Sheriff's Department.

Five people suspected in a gun-related assault were detained Sunday during a 90-plus-minute pursuit of an SUV that crisscrossed the San Gabriel Valley and parts of East Los Angeles, Boyle Heights and downtown Los Angeles, according to the L.A. County Sheriff's Department.

Deputies from the Pico Rivera station responded to a report of a possible assault at or near Rose Hills Cemetery in Whittier and saw a black SUV they believed might have been involved, Ortiz said.

Deputies tried to pull the vehicle over, but the driver allegedly pointed a gun at the sheriff's cruiser and sped off, triggering the pursuit, he said.

The driver traveled back and forth from the San Gabriel River (605) Freeway to surface streets, into neighborhoods, then onto and off of the Hollywood (101) Freeway, onto surface streets in East L.A., Boyle Heights, and downtown L.A.

About midway through the pursuit, a California Highway Patrol unit attempted a PIT maneuver near the 605 and Slauson Avenue in Pico Rivera, and while it spun the SUV around, it failed to disable it.

The driver alternated between the right and wrong sides of the roadway, ran red lights, ignored speed limits and endangered the lives of others, eventually striking a car on Telegraph Road in East L.A. and continuing on.

During the chase, a passenger exited the SUV and ran through an intersection in an escape attempt. As the vehicle came to a stop a short time later, two more passengers got out and then tried to act casual, so as to blend in with the public, as the SUV drove away.

Around 5:40 p.m., the driver sped through downtown streets and into the Vernon area.

He left the Long Beach (710) Freeway about 6 p.m. and got onto the westbound 10 Freeway.   About 6:20 p.m., he returned to the Pico Rivera area and lost control of the SUV, apparently disabling it, and requiring him and his remaining passenger to hop out.

News cameras stayed with the driver as he ran along train tracks, jumped over two backyard fences and then, seemingly exhausted, finally surrendered near Slauson and the Santa Ana (5) Freeway in Pico Rivera, where he was taken into custody without further incident.

His four passengers were also detained, Ortiz said, adding that it was not immediately known if any of them will be arrested.

Neither was it clear if the suspects were involved in the alleged armed assault that initiated the law enforcement response.