The company compared the space hotel to a cruise ship, complete with restaurants, bars, musical concerts and movie screenings.

ALTA LOMA, Calif. - Much like taking the family on a cruise or a trip to visit Mickey Mouse at Disney World, one California company believes that going to space will eventually become just another vacation option.

Design plans for the Von Braun Station, the first-ever hotel in space, have been revealed by the Gateway Foundation. Set to have the first 100 people on board by 2025 and be fully complete by 2027, the company said the Von Braun Station is designed to give tourists “the feel of home” with luxury suites, recreation halls, restaurants and bars — while simultaneously floating in space with an out-of-this-world view.

It will also hold research facilities for governments, scientists and commercial interests, the foundation said.

“As a species we have had a transient and limited presence in space by a small number of specialists for over 58 years,” Senior Design Architect Tim Alatorre told the architecture and design magazine Dezeen. “We want to change that and open up space to anyone who wishes to work or live in space.” 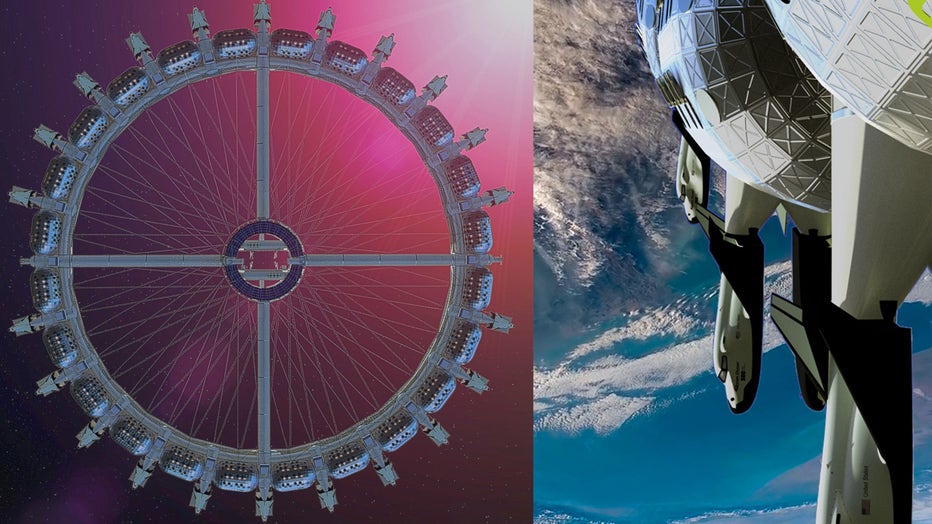 The Von Braun Station will feature 24 modules with a different dedicated function, the company said. In addition to the hotel, it will also hold research facilities, restaurants and bars. (Photo credit: The Gateway Foundation)

When compared to the Stanley Kubrick movie "2001: A Space Odyssey," Altorre said the atmosphere of the station station hotel will be warmer with fabrics, lighting, paints and materials with texture to "help us to connect and feel at home."

Some of the planned for activities at the luxury hotel in space could include low-gravity basketball, trampolining and rock climbing. Because the majority of the station will initially have about a sixth of Earth’s gravity and other parts with near zero gravity, there’s also potential for playing fictional games like Quidditch from the Harry Potter series and the battle games from the Ender's Game series, Altorre told Dezeen.

“There will also be many of the things you see on cruise ships: restaurants, bars, musical concerts, movie screenings, and educational seminars,” Alatorre told Dezeen. “Eventually, we plan on offering excursions in true space ships (not designed to return to Earth) out to other stations or the moon.”

Alatorre said astronaut Scott Kelly's recent stay on the International Space Station for nearly a year made clear that “long term habitation of space in microgravity is not sustainable.” The senior design architect said the main objective for the Von Braun Station is to be the first space station to have artificial gravity, allowing a permanent culture of people living and working in Earth’s orbit.

The station is planned to have a total population of 350 to 450 people, including more than 100 crew.

When it comes to the logistics of holding hundreds of people, Altorre told Dezeen that the majority of food will be served in one of the two restaurants on the station “with all of the dishes you would expect on a luxury cruise ship or in a major hotel.”

With artificial gravity, the restroom facilities will function “almost identically” to how they are on Earth, Altorre said. Drinking water will be brought from Earth, and showers and toilets will use recycled water.

Alatorre told Dezeen that much of the technology and overall architecture of the Von Braun Station was “heavily influenced” by the International Space Station, but varies on the way it will be constructed. While the ISS was assembled in orbit using the labor of astronauts performing space walks, this station will primarily be constructed in space by automated and semi-autonomous systems.

The space hotel design was named after Dr. Wernher von Braun, a rocket scientist and space architect who popularized the rotating space station concept — first in Germany and later in the United States. Members of the Gateway Foundation “overwhelmingly” voted for the name earlier this year.